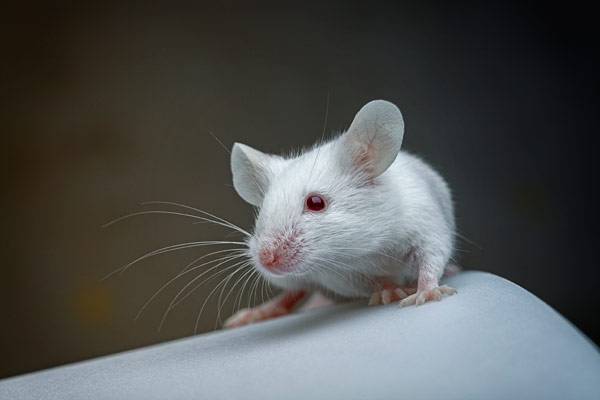 On the record: VoICE can pick up subtle differences in high-pitched mouse squeaks.

A new computer program can quickly and accurately characterize bird songs and squeaks from mice, according to a study published 28 May in Scientific Reports. Researchers used the program, called VoICE, for ‘Vocal Inventory Clustering Engine,’ to show that mouse pups with an autism-linked mutation call out for their mothers differently than typical mice do1.

Mice with autism mutations often produce abnormal vocalizations as pups or distorted squeaks while interacting with other mice. Analyzing the altered squeaks may help researchers trace the neural circuits of social communication.

Songbirds are harder to manipulate genetically, but their songs are more similar to language than are the high-pitched calls of mice. They, too, can provide clues about communication deficits in autism.

Although automated methods for parsing birdsongs exist, researchers studying mouse calls must listen to each one and manually classify the various types. This process is time-consuming and error-prone, as differences between mouse calls can be subtle.

VoICE uses algorithms that automatically sort mouse calls into categories by their duration and the range and order of their tones. It breaks birdsongs into parts based on repeating patterns of one note or more, called ‘syllables.’ The program then displays how different syllables or calls relate to one another.

The researchers used VoICE to analyze the songs of two zebra finches that they made deaf for the experiment and compared them with those of a normal zebra finch. Just as people who go deaf begin to speak differently, birds that become deaf alter their songs over time, they found.

One of the birds began to sing syllables in a different order, whereas the other bird began to include tones that were less pure and more like white noise. The researchers say VoICE makes fewer errors in identifying the syllables than other programs do.

The team is engineering a zebra finch lacking CNTNAP2. Comparing the mutant mice with these birds and mice may reveal the gene’s role in communication.