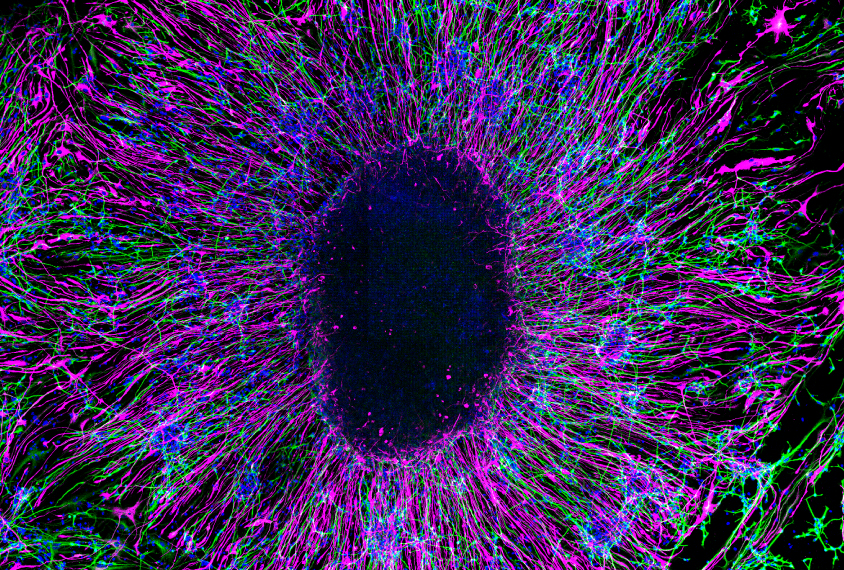 One method enables scientists to recreate specific brain regions rather than an entire brain1. The other reduces the time and cost to make a mini-brain, promising to boost sample sizes from a few organoids per study to hundreds2.

Scientists typically make brain organoids by transforming cells from a person’s skin, blood or urine into stem cells capable of turning into almost any cell type. They then use chemicals to transform the stem cells into brain-cell precursors, and let them mature.

The resulting mixture of cells is often unpredictable, however, so it does not mimic the composition of any particular brain region.

In one of the new studies, researchers created mini-brains that resemble either the dorsal forebrain or the ventral forebrain, two regions of the developing brain.

The researchers use a multi-step process: They coax stem cells to become brain-cell precursors in a standard way. They then use a chemical cocktail to shape the precursors into a specific mixture of cells characterizing either the dorsal or ventral forebrain.

The brain-like blobs can be kept alive for more than two years, maturing long enough to develop the cell types, activity patterns and gene-expression profiles of a typical human brain after birth.

The researchers allow the mini-brain regions to fuse by suspending two of them in the same tube. The fusion enables researchers to study how brain regions form connections and communicate. The report was published in September in Nature Protocols.

The approach may also help reveal how neurons’ migration goes awry in autism.

Neurons that dampen brain activity in the ventral region typically travel to dorsal areas during brain development. In autism, these inhibitory neurons do not migrate properly3. The fused mini-brain regions may help researchers better understand this movement and how it differs in autism.

In a separate study, scientists drastically cut the time it takes to build a mini-brain. The researchers discovered that they could boost the proportion of stem cells that mature into brain cells if they started transforming the cells earlier — after letting stem cell colonies divide just once instead of 20 times over four to five months. The efficiency was good enough that, despite having a smaller pool of cells, the researchers were able to coax enough of them to become brain cells to make an organoid.

Mini-brains began to form just three days later. And in less than two weeks, the team had eight mini-brains that mimicked features of the early developing brain. The work appeared 22 September in Stem Cells and Development.

The process is 10 times faster than the usual method, says lead investigator Alysson Muotri, professor of pediatrics and of cellular and molecular medicine at the University of California, San Diego. It is also much cheaper. It costs about $1,000 to make one mini-brain using this method, compared with up to $30,000 using traditional techniques, Muotri says.