New technique tunes in to molecular chatter in neurons

Researchers can eavesdrop on the molecular chatter within neurons, thanks to fluorescent sensors that track many different signaling molecules at once. The new technique could help reveal how signaling pathways differ in people with autism and identify molecular targets for therapies.

To detect specific molecules in cells, researchers often use fluorescent ‘reporters’ that glow when they bind to their designated targets. “The problem is most of these are green because they’re based upon a green protein from jellyfish,” says Edward Boyden, professor of neurotechnology at the Massachusetts Institute of Technology, who led the new work. As a result, scientists can usually trace only one target at a time.

A few red-fluorescent reporters are available, making it possible — albeit difficult, Boyden says — to follow two molecules. But scientists have had no easy way to study the complex dynamics of signaling pathways that involve more than two molecules.

With the new technique, researchers can monitor up to five molecules at once. Specialized sensors tag each molecule and form distinct clusters within a cell that can be distinguished based on location rather than color.

Boyden and his colleagues crafted the sensors from conventional fluorescent reporters by attaching two small proteins, called self-assembling peptides, to each one. The peptides are specific to individual reporters, and each peptide binds only to others like it, causing the reporters to cluster by type.

The team also added a unique antibody target to each reporter complex. Because the clustered reporters hardly move during cell imaging, the researchers can later stain cells with antibody markers to identify the clusters. 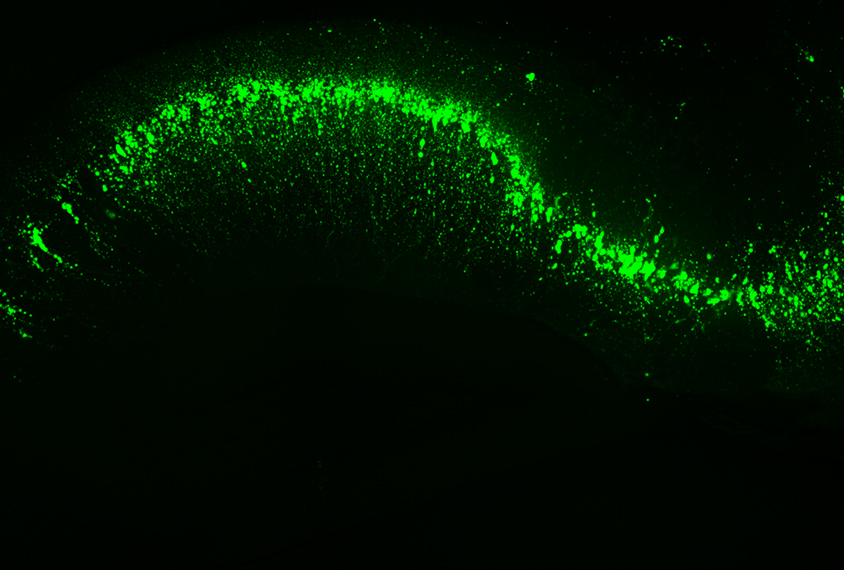 Afterglow: Clumps of sensors (green) that are specific to one type of molecule can later be distinguished using antibody markers.

The team modified existing green-fluorescent reporters for three different signaling molecules: calcium ions, cyclic AMP and an enzyme called protein kinase A (PKA). In neurons, these molecules make up a signaling network that helps shape the connections between cells, a process thought to underlie memory and learning.

The researchers tested the modified sensors in mouse neurons in a dish, exposing the cells to a drug that increases levels of cyclic AMP and watching for changes in calcium ion levels and PKA activity. They also tested the sensors in brain slices from mice, which expressed two of the reporters only in certain neurons. They used a microscope to track fluorescence in the cells and brain slices before, during and after exposure to the drug to gauge the activity of the molecules.

The modified reporters create hundreds of bright dots within a cell — the vast majority of which are specific to one type of molecule, the researchers reported in December in Cell. The reporters do not alter cells’ health or regular signaling.

Using the sensors, the researchers tracked changes in the levels of calcium ions, cyclic AMP and PKA activity over time. In both cells and brain slices, two subsets of cells show distinct responses to cyclic AMP activity, they found. In some cells, a rise in cyclic AMP is swiftly followed by an increase in calcium ions, whereas other cells have a slower response. The faster response is also associated with stronger PKA activity.

These different responses require further investigation but could help explain why some signals lead to lasting changes in the strength of neuronal connections, whereas others do not, the researchers say.

The team modified additional reporters that sense two other enzymes — protein kinase C and extracellular signal-regulated kinase (ERK) and tested all five reporters in cells in a dish. They built the ERK reporter to glow red, but with the same peptides as the cyclic AMP reporter. Even though the two reporters clustered together, the team could distinguish them by their color.

Boyden and his team are currently working on more reporters. In the future, scientists could potentially track hundreds of molecules at once using this approach, he says.