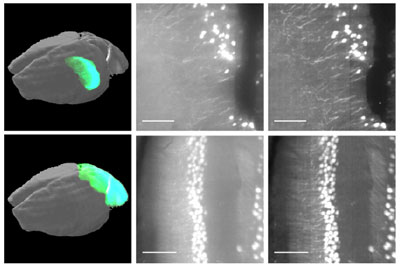 The method combines a technique that allows for rapid scanning of brains with another that creates pin-sharp images that allow for 3D reconstructions.

One of the greatest remaining challenges in neuroscience is mapping how the billions of human neurons and trillions of connections between them come together to form a functioning brain. To do this, researchers are developing ways to build 3D photographic reconstructions of entire brains, starting with those from mice.

Many of these methods rely on slicing intact brains into thin sections and photographing each one. But this can be time consuming and introduces variability when reassembling the sections. It also destroys some delicate components, such as blood vessels. Photographing a brain that is chemically rendered transparent can lead to blurry images as a result of light scattering.

In the new study, researchers took pictures of intact brains using a technique called light-sheet microscopy. In this method, light penetrates the brain in a plane from the side, instead of from the top or the bottom, and then travels perpendicularly up to the camera. This technique is relatively rapid because it illuminates an entire plane at once, and does not bleach the sample. However, as the light travels upwards, it scatters, leading to blurry images.

Purkinje neurons in a slice of the cerebellum

Neurons photographed in an intact brain

To sharpen the images, the researchers combined the technique with confocal microscopy, which filters out all light except light emitted from a specific plane.

The researchers also created a 3D reconstruction of a whole mouse brain in less than two days. They are working on shortening the time to a few hours. They are also developing software that can automatically trace connections between neurons, creating a map of brain connectivity.