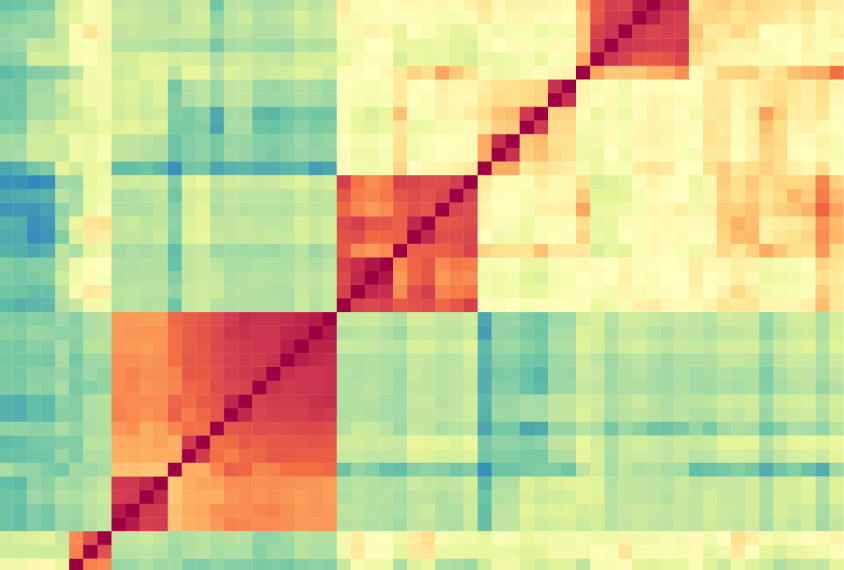 Cell clusters: A new method uncovers patterns of DNA tags in cells similar to the patterns in an online database.

A new method helps researchers map the patterns of chemical tags in large batches of cells1.

These chemical tags, called methyl groups, attach to the DNA base cytosine when it is followed by a guanine, and influence the expression of the associated gene. Tagging patterns vary from one cell to the next. The brains of people with autism have been shown to have unique DNA methylation patterns.

To identify methylation patterns, researchers typically treat DNA with the chemical bisulfate, which converts the cytosine to another base, uracil. There’s no reaction if the cytosine is methylated, so researchers can figure out the pattern by looking at the cytosines that remain.

But the reaction for each cell must occur in a separate vessel or well, so the approach is expensive and inefficient.

In the new method, called sci-MET, researchers pool cells into roughly 100 different batches and tag DNA in each cell with a string of molecules unique to that batch. They then distribute the tagged DNA to a second set of 96 wells. They treat this DNA with bisulfite and add a second set of molecular labels specific to each well.

Together, the two labels yield a unique chemical code for each cell. This trick allows researchers to determine methylation patterns for hundreds of cells at once.

The team tested sci-MET on a line of immune cells called B lymphoblasts. Of the roughly 2,000 cells treated in that experiment, the researchers were able to identify 708 individual cells by their molecular labels; the methylation patterns in those cells matches the reported patterns for the cell lines.

The researchers then used sci-MET with three other human cell lines and grouped the cells by methylation pattern. Those patterns match those of cell lines in ENCODE, an online database that maps the regulatory regions of the human genome.

The tool is described in the June issue of Nature Biotechnology.