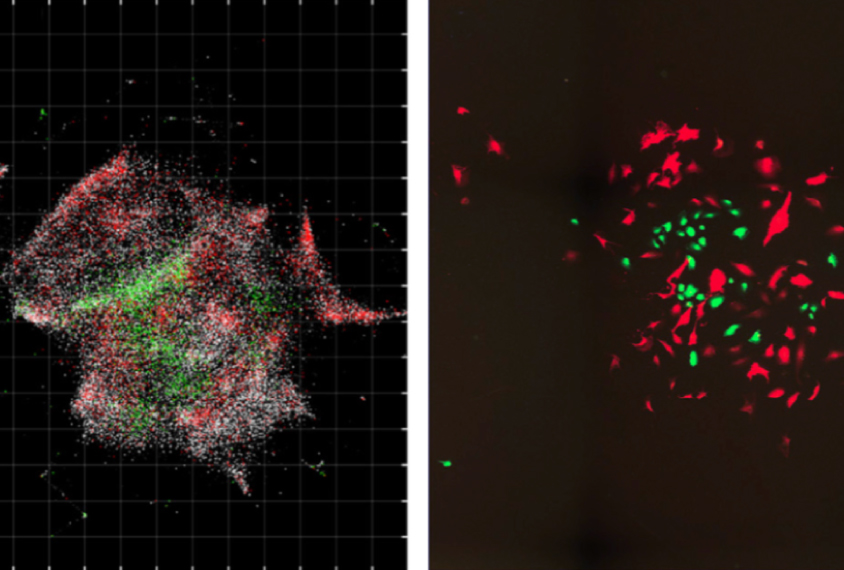 DNA microscope: DNA microscopy shows the locations of cells (left) as accurately as a fluorescence microscope does (right).

A novel approach to microscopy reveals the sequences and spatial arrangement of DNA within cells1. The tool could help researchers better understand the molecular interactions that underlie autism.

Traditional microscopes probe cells’ structure by reflecting electromagnetic radiation (such as light or electrons) off the cells. They enable scientists to see how molecules are arranged in space but reveal nothing about the molecules’ genetic makeup. Meanwhile, sequencing decodes DNA and RNA but says nothing about how they are distributed within the cell.

The new method uses chemical reactions to map the DNA molecules in a sample while simultaneously sequencing their genetic information.

The researchers first use a primer to attach random DNA tags to messenger RNAs (mRNA) — genetic intermediaries between DNA and protein — in their sample. They then copy and amplify the tagged mRNAs, generating a cloud of replicas that diffuse outward from the original.

When two clouds from neighboring mRNAs overlap, the replica sequences stick together, forming one long strand. The primer marks each of these connections with a new, unique DNA tag. With each interaction individually tagged, the researchers can track how often molecules from one cloud bump into molecules from another — an indication of how close the mRNAs are.

The researchers then grind up the cells, sequence the DNA and use computer algorithms to deduce the mRNAs’ relative arrangement.

They tested their technique on a mixed sample of breast cancer cells that express either red or green fluorescent proteins. DNA microscopy faithfully reconstructed a 2D image of the cells’ distribution when compared with an image made using a fluorescence microscope.

At its current resolution limit, the technique reveals the arrangement of cells within a tissue, but it should eventually be able to deduce cells’ internal structures too, the researchers say. It can also accurately sequence long stretches of genetic code; its error rate is between one and three nucleotides per thousand sequenced. The results appeared in June in Cell.

The technique may offer insight into how certain mutations, such as those linked to autism, alter a cell’s structure and function. For example, it could be used to study how mutations affect how neurons form connections, a process that is often altered in people with autism.