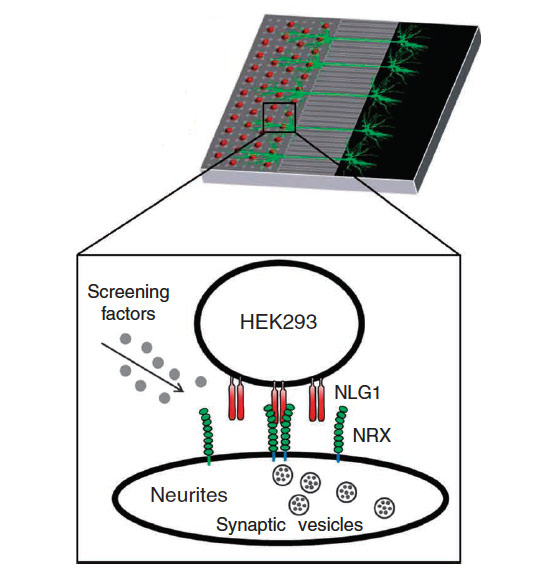 Organized array: By culturing cells on specialized plates, researchers can scale up an assay to screen for drugs that affect synapse formation.

A new technique efficiently screens for compounds that enhance or inhibit the formation of synapses, the junctions between neurons, according to a study published 25 October in Nature Communications1.

In the past few years, several studies have implicated synaptic proteins, including neurexins and neuroligins, in autism.

The precise array of proteins at each synapse regulates its plasticity, the ability to alter its strength in response to experience. Because numerous proteins function on each side of every synapse, however, parsing out the role of individual molecules is challenging.

Scientists have previously studied the role of an individual protein in synapse formation by looking at the interaction between neurons and non-neuronal cells that express the protein.

For example, in the new study, the researchers focused on the interaction between neurons and HeLa cells that express NLGN1. They also added a new dimension to the traditional approach by growing neurons on a specialized plate that confines the interactions to ordered wells.

The researchers first placed HeLa cells engineered to express NLGN1 into a series of wells on the plate. They grew cultured neurons in another section of the plate and induced the neurons to extend their branches into the HeLa wells. By adding a different molecule to each well, the researchers then screened the effects of the compounds on NLGN1-mediated synapse formation.

A fluorescent molecule that binds to synapsin, a protein that functions only at active synapses, allowed the researchers to assess both the shape and activity of synapses.

The researchers then screened 15 other histone deacetylase inhibitors and found that 8 of them also enhance synapse formation.

Using these plates would allow scientists to screen more than 100,000 drug candidates in a few months as opposed to several years, the researchers say. They could also use the method to find molecules that affect excitatory synapses differently than inhibitory ones. Studies suggest that an imbalance between excitation and inhibition in the brain could underlie autism.