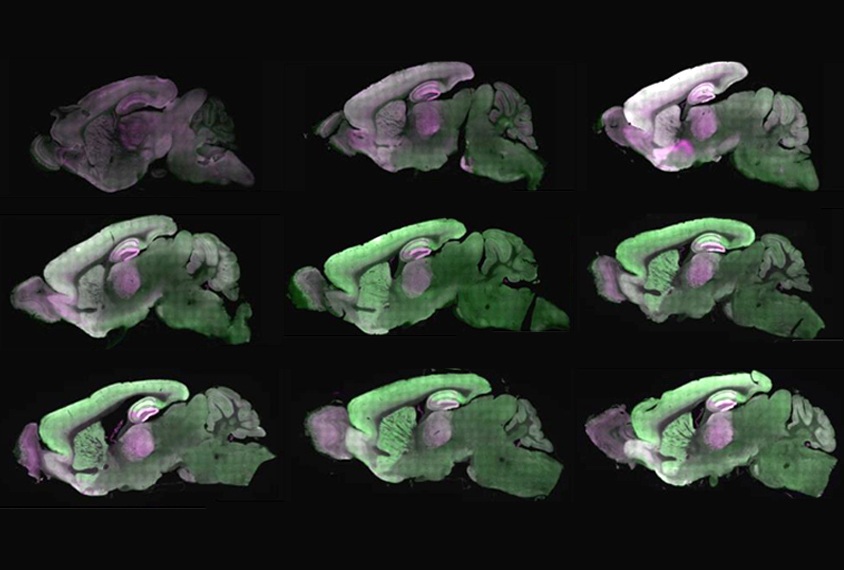 A new atlas lays bare how neuronal connections, or synapses, change from birth to old age in mice1. The ‘synaptome’ may help researchers investigate how mutations linked to autism affect these connections at different stages of life.

Synapses are the junctions where information is transferred between cells, and they are integral to functions such as learning, behavior and movement. Autism is linked to several mutations that alter synaptic proteins.

In 2018, researchers created the first synaptome of the mouse brain, mapping billions of synapses and sorting them into types based on their size, shape and composition2. The map revealed that synapse subtypes have distinct distributions in the brain, suggesting they have specific functions. This synaptome mapped the mouse brain only at one point in time, however.

In the new work, the team charted five billion synapses in mice at 10 different ages, revealing how synapses change in number, structure and molecular makeup throughout life.

“It’s the first time anybody’s ever done that in any species,” says Seth Grant, professor of molecular neuroscience at the University of Edinburgh in Scotland, who led the research.

To create the atlas, the team engineered mice to express fluorescent markers of different colors on two proteins — PSD95 and SAP102 — that frequently line the signal-receiving end of excitatory synapses, which make up the preponderance of synapses in the brain. Mutations in these proteins have been linked to autism, schizophrenia and intellectual disability.

The researchers then took brain images of mice across the animals’ lifespan, from 1 day to 18 months old, with clusters of the two proteins revealing the location of the synapses. They used machine learning to automatically sort synapses into three types based on the proteins present — PSD95, SAP102 or both — and 37 subtypes based on their shape and size.

The synaptome changes throughout life, the researchers reported in July in Science. These changes can be split into three phases that correspond to the mouse equivalent of childhood and adolescence, early adulthood and late adulthood in people.

In the first phase, from birth to 1 month of age, synapse density increases rapidly. The number of synapses then levels off in the second phase and, after 6 months, begins to decline as the mouse enters old age.

The types of synapses in the brain also diversify quickly in the first phase. They continue to change throughout life, with particular synapse types and subtypes peaking at different ages in distinct brain regions.

In old age, however, synapses across brain regions begin to resemble one another, which may underlie declines in cognitive function and changes in behavior that are typical of aging.

The lifespan synaptome, which can be explored online, could help researchers gain a better understanding of why mutations linked to autism or other conditions affect synapses in specific brain regions at certain ages, the researchers say. The team is currently mapping the synaptome of mice carrying mutations to study how genetic alterations affect synapses throughout life.