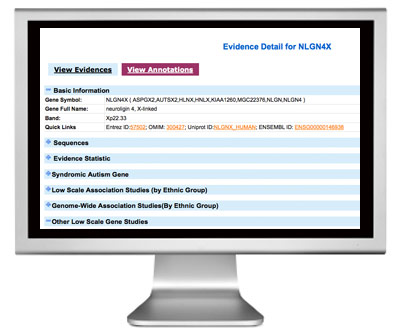 Ranked resource: AutismKB lists studies that associate candidate genes with autism and rates them on the strength of the evidence.

Ranked resource: AutismKB lists studies that associate candidate genes with autism and rates them on the strength of the evidence.

Over the past few years, numerous mutations and genetic variants have been linked to autism. Most cases of autism probably result from carrying a combination of these variants.

According to the researchers, there are three existing databases, including SFARIGene — funded by the Simons Foundation, SFARI.org’s parent organization — that summarize and rank the evidence linking various genes to autism.

The new database includes autism candidate genes from a wider range of studies than do the other resources, the researchers say.

They searched the abstracts of more than 4,000 articles and identified 11 genome-wide association studies, 242 association studies that focus on candidate genes, 13 studies of gene expression, 95 studies of copy number variants — duplications or deletions of DNA — 23 genome-wide analyses that associate variants across a chromosomal region and 236 studies that link a particular gene or protein to autism.

They also searched the Online Mendelian Inheritance in Man, or OMIM, database for autism-related disorders such as fragile X and Rett syndromes.

The researchers ranked the genes from these studies by assigning a number to each based on the strength of the evidence.

The resource is a comprehensive overview of the literature, but may be too inclusive, some experts caution. For example, it includes genome-wide association studies with few participants, which many researchers argue are often statistically weak.

However, users of the database can manually rank what they perceive to be the significance of various approaches. For example, they can assign a score of one to low-scale association studies.

The database also includes functional information about each gene, collected from various sources, such as the Allen Brain Atlas and the Mouse Genome Informatics resource. The functional pathways most highly associated with autism are those that involve synapses, the junctions between neurons, the study found.