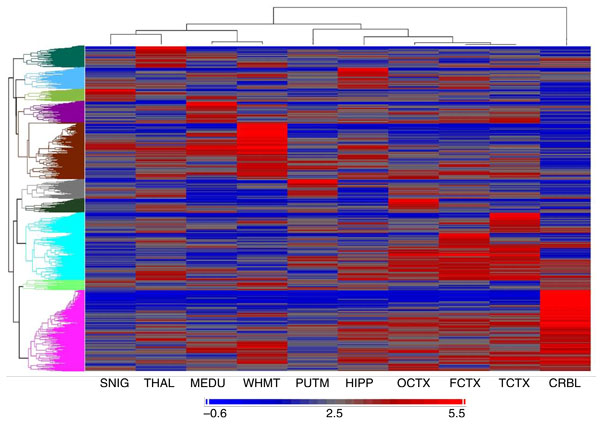 Controlled expression: Genetic variation has similar effects on gene expression in some brain regions, such as the frontal cortex (FCTX) and temporal cortex (TCTX), but not in others.

A new online database called Braineac details how variations in DNA sequence shape gene expression in the human brain.The open-access resource,described 31 August in Nature Neuroscience, may help autism researchers understand the effects of genetic variants — particularly those in noncoding regions of the genome — linked to the disorder1.

The study used a technique called expression quantitative trait loci (eQTL)mapping to examine DNA sequence variants and related changes in gene expression in134 postmortem human brains.The brains belonged to people who died between the ages of 16 and 102, and who were free of neurological disease.

The researchers focused on ten brain regionswith relevance to neurological disorders.These include the frontal cortex and the hippocampus, both of which are implicated in autism.

They measured the expression levels of26,493 genes and 291,705 exons — short sequences of coding DNA interspersed with noncoding sequences.They then looked at changes in these expression levels in relation to 577,000 DNA insertions and deletions and 5.88 million single-nucleotide variants in the DNA sequence.

The study uncovered 30,333 associations between changes in gene expression and nearby genetic variants or groups of genetic variants.The variants are spread across coding and noncoding regions of the genome.

Certain variants have different effects on gene expression depending on their location in the brain. They also affect when and where individual exons are expressed, which may lead to the production of alternative proteins.

The database may help researchers understand the effects of genetic variants seen among people with disorders such as autism. It may be particularly useful in teasing out the impact of variants in noncoding regions of the genome, which are poorly understood.

Researchers can search the database by a gene of interest to find single-nucleotide variants that affect its expression or vice versa. They can also download portions of raw data or even the entire dataset.