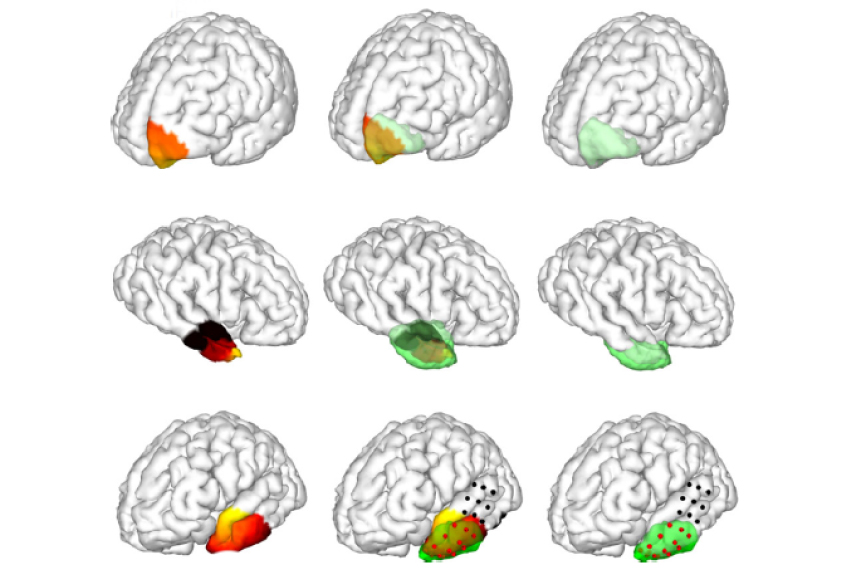 Sourcing seizures: The noninvasive FAST-IRES method can localize the source of seizures as effectively as other, more invasive methods.

A new noninvasive method can effectively map the source and scale of seizure activity in people with epilepsy, according to a recent study1. The tool could lower the number of surgeries needed to treat epilepsy and may also reveal brain network differences in conditions such as autism.

Epilepsy is a neurological condition caused by too much electrical activity in the brain, which leads to seizures. Untreated, seizures can have “profound negative consequences,” says Shafali Spurling Jeste, associate professor of psychiatry, neurology and pediatrics at the University of California, Los Angeles. Those consequences include cognitive damage, physical risk and, in rare cases, death. Studies estimate that anywhere from 2 to 50 percent of autistic people have seizures.

About two-thirds of people with epilepsy can control their seizures with medication. For the remaining third, the best treatment may be surgery to remove the part of the brain that is generating the seizures.

Finding and removing the entire area is critical: Remove too little and you do not stop the seizures; remove too much and you risk taking out essential brain tissue and causing further impairment. Clinicians often rely on an invasive technique to try to find the area responsible for someone’s seizures. They implant electrodes deep into the cortex, the outer layer of the brain, in one surgery before removing brain tissue in a second surgery. But these methods can lead to bleeding and infection.

The new approach couples machine learning with electroencephalography (EEG) recordings from 76 electrodes placed on the scalp, to localize seizure activity in the brain. Unlike previous EEG techniques, it can also show how much brain tissue is involved.

Noninvasive imaging techniques come with trade-offs. EEG is adept at recording activity during a seizure but cannot always home in on a seizure’s source with precision. The layers of fluid, skull and brain tissue that lie between the electrodes and the underlying brain activity can distort the signal. And reverse-engineering the source location from that distorted signal is mathematically difficult.

Previous EEG methods could “pinpoint the center of gravity” of the recorded seizure activity, says lead investigator Bin He, professor of biomedical engineering at Carnegie Mellon University in Pittsburgh, Pennsylvania. But knowing where seizure activity is centered is not enough for surgical treatment of epilepsy.

He and his colleagues developed the new algorithm, termed ‘fast spatio-temporal iteratively reweighted edge sparsity (FAST-IRES),’ over the course of five years. Rather than just localizing the source, their algorithm provides information about the extent of the brain network that gives rise to the EEG signal.

FAST-IRES also uses machine learning to calculate the thresholds at which signals are deemed significant, something researchers or clinicians have ordinarily done.

“The very unique merit of our methodology is it’s entirely data-driven,” He says. “We don’t have to assume anything” about the size or extent of brain activity that contributes to the EEG signal.

As a proof of concept, He and his colleagues tested FAST-IRES on EEG recordings from 36 people with epilepsy who were pursuing surgery as treatment. The researchers found that their method was as successful as implanted electrodes at finding the location and extent of the seizure source, and would have produced similar surgical outcomes. The work appeared in Nature Communications in April.

“It’s an important step in the right direction,” says Alexander Rotenberg, associate professor of neurology at Harvard University. The technique should be considered complementary to currently available tools, he says.

Ultimately, He and his colleagues hope that FAST-IRES may offer insight into other conditions that result from underlying differences in brain networks, such as autism. The technique is especially useful for imaging rapidly changing brain activity, he says.

Even so, identifying differences in autism would be challenging, Jeste says.

“Autism is so inherently heterogenous that it’s very difficult to find markers that would be relevant to the whole group,” she says.