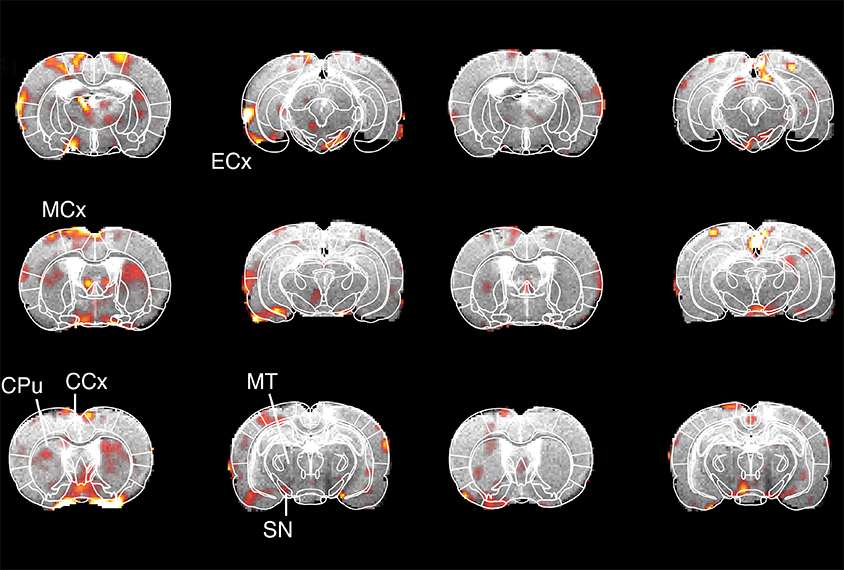 A new probe enables researchers to monitor interactions among select neurons across the brain, using functional magnetic resonance imaging (fMRI). The tool may be useful for studying brain circuits in animal models of autism.

Traditional fMRI records blood flow changes as an indirect measure of neuronal activity. It can track activity across the entire brain, but not signaling patterns among individual neurons.

Optical probes can take more precise measures of neuronal activity. But these probes — which emit fluorescent light in response to calcium entering a firing neuron — work only in transparent animals, such as zebrafish, or by drilling a hole in an animal’s skull, limiting a researcher’s view to activity in the brain’s outer regions.

In the new study, researchers engineered a calcium-sensitive version of an enzyme called nitric oxide synthase, dubbed NOSTIC for ‘nitric oxide synthase for targeting image contrast.’ When expressed in neurons, NOSTIC generates nitric oxide — a gas that causes blood vessels to expand and blood flow to increase — in response to the calcium spike associated with neuronal activity, thereby creating a signal that can be picked up by fMRI.

The researchers packaged this genetic probe into a herpes virus vector and injected it into the striatal region — which is involved in motivation and movement coordination — in the brains of rats. The herpes virus is used to trace neural circuits because it enters every cell that communicates with the infected region.

Three weeks later, they sedated the rats and monitored the animals’ brain activity with fMRI while electrically stimulating the lateral hypothalamus, a rewarding stimulus known to activate the striatum.

By repeating the experiment with the addition of a drug that inhibits the probe and comparing the results, the researchers were able to selectively measure the activity of NOSTIC-labelled cells.

Neurons in the midbrain, motor cortex and entorhinal cortex, a region involved in memory, showed NOSTIC-specific increases in activity in response to deep brain stimulation, suggesting that the regions are involved in crosstalk with the striatum in response to reward. The study was published in March in Nature Neuroscience.

The tool could be used to map neuronal interactions and reveal how they give rise to differences in motor and social behavior in animal models of autism, says lead investigator Alan Jasanoff, professor of biological engineering, brain and cognitive sciences, and nuclear science and engineering at the Massachusetts Institute of Technology.

Jasanoff’s group is testing the probe in non-human primates and is working on methods to boost the probe’s signal while minimizing side effects. In principle, the probe could be coupled to other intracellular events or higher-resolution imaging methods, such as functional ultrasound imaging, Jasanoff says.