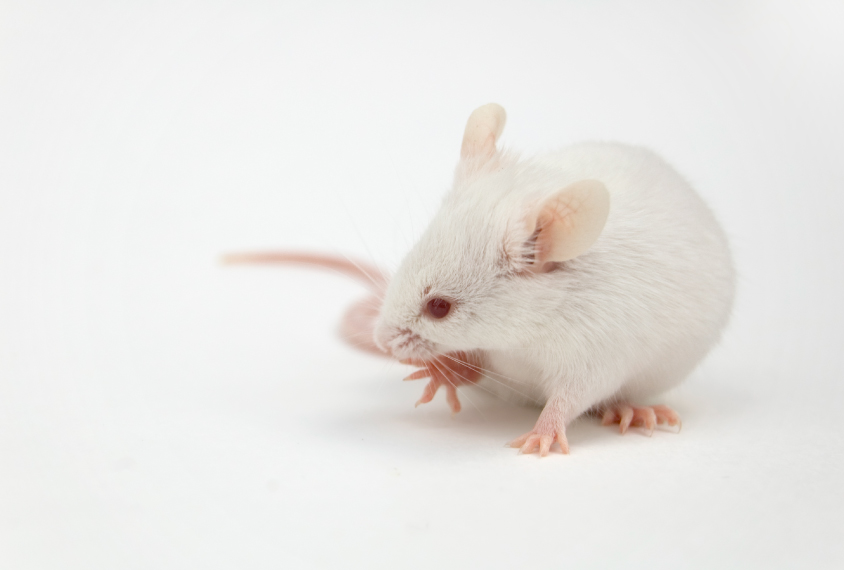 Sex effects: A female mouse model of Rett syndrome grooms excessively, a behavior not seen in male models of Rett.

A new line of female mice may enable researchers to test gene-based therapies for Rett syndrome, a condition related to autism1.

Rett syndrome is characterized by a loss of skills around 1 year of age, seizures and intellectual disability. The condition stems from mutations in the MECP2 gene on the X chromosome, and primarily affects girls. Most boys with MECP2 mutations die in utero or early infancy.

In girls, one of the two X chromosomes is randomly inactivated in each cell of the body early in development. So in girls with Rett syndrome, some cells make typical levels of MECP2 protein and others produce none. Each cell contains one intact version of the gene, however, so researchers have pursued treatments designed to activate the silent copy.

Until now, no good animal model existed for testing these treatments. The standard Rett mouse model is male, because male mice have severe features of the condition. They die at roughly 70 days instead of 2 to 3 years and their problems are obvious. Female mice, by contrast, have a typical lifespan and mild features that vary, because each animal makes MECP2 in different numbers and sets of cells.

The new study presents a female mouse in which one X chromosome is almost always the one silenced and the other is missing MECP2. The researchers ensured that each cell silences the intact copy of MECP2 by deleting a DNA segment called Tsix on the same chromosome. Tsix encodes an RNA that interferes with chromosome silencing.

The mice make less than 5 percent of typical levels of MECP2 protein, the researchers found. They live only three weeks longer than male Rett mice and have motor problems and tremors similar to those of males.

The mice also groom to the point of self-harm, something researchers have not seen in the males, suggesting that this is a sex-specific trait.

The researchers created another Tsix mutant in which the X chromosome containing the typical MECP2 gene is silenced less reliably. These mice show up to 20 percent of typical MECP2 levels and fare significantly better than those with none.

For example, female mice with 5 percent of typical MECP2 levels live for 160 days (more than twice as long as the males), and those with 10 to 20 percent live for 400 days.

The findings suggest that even partially restoring MECP2 expression would be beneficial to people with Rett syndrome. They appeared 7 August in the Proceedings of the National Academy of Sciences.

Last year, the same team showed that a drug combined with a specific piece of RNA boosts expression of inactivated MECP2 by 30,000-fold in cultured cells2. They aim to test this treatment in the new mice to see whether it alleviates features of the condition.