New method vets quality of antibodies for experimental use 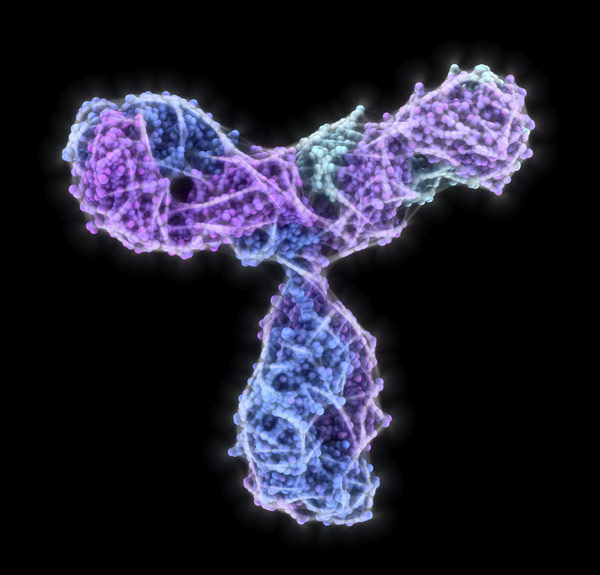 ©SPL/Science Source Quality control: Antibodies vary in their ability to stick to their targets — and in their affinity for the wrong molecules.

Researchers have devised a reliable technique for evaluating how well antibodies home in on specific molecules in scientific experiments. The new approach, published 29 June in Nature Methods, could take some of the guesswork out of studies that use these sticky immune molecules to flag proteins of interest1.

Autism researchers use antibodies to determine the binding partners of proteins associated with the disorder. They also deploy antibodies to visualize the distribution of proteins in tissues and to map chemical tags on chromatin, the DNA-protein complex that forms chromosomes. These tags, which regulate gene expression, are irregularly placed in people with the disorder.

Using antibodies to identify and isolate molecules — a technique known as immunoprecipitation, or IP — is a hit-or-miss enterprise. An antibody often sticks to molecules other than its target, marking the wrong material, or it binds too weakly to its target and so fails to home in on it reliably.

To crack down on these antics, the researchers developed a way to vet antibodies ahead of time.

They generated 1,124 antibodies as a test set. After incubating the antibodies with the molecular contents of human cells, they used mass spectrometry — a method of identifying molecules by their mass and charge — to determine which proteins each antibody adhered to.

Each antibody stuck to many proteins. If the intended target of the antibody was the same as the protein it bound most often, that antibody earned the highest rating, dubbed ‘IP gold standard.’  Of the 1,124 test antibodies, 354 won that ranking. The rest of the antibodies either bound to their targets infrequently or not at all.

To validate their method, the researchers distributed 20 antibodies of varying quality to four other labs, while retesting them in their own lab. They did not tell any of the scientists who received the antibodies about their targets or reliability.

The groups agreed that 12 of the antibodies should get the ‘IP gold standard’ label and that 4 do not make the cut. Scientists disagreed on the quality of the remaining four.

The researchers also evaluated whether antibodies can isolate specific chromatin-binding proteins. Many chromatin-related proteins are associated with autism. The researchers found that antibodies designated IP gold standard by their system do home in on the correct chromatin sites, whereas antibodies that fared poorly on their scale cling nonspecifically to various places on chromatin or hardly bind to chromatin at all.

When the researchers exposed fluorescently tagged versions of their antibodies to human cells, the antibodies revealed the distribution of proteins in the cells. Here, too, the gold-standard antibodies perform best, showing fluorescence patterns that match the known dispersal of the proteins.