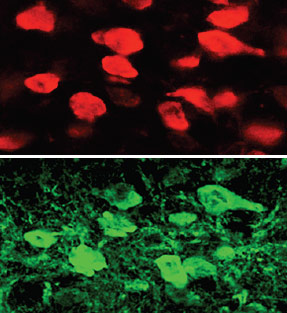 Viral delivery: Beams of light prompt neurons to express certain genes (red and green), introduced into the neurons by a virus.

Researchers have modified optogenetics — a technique that activates neurons in mouse brains with beams of light — to toggle a gene on or off. They reported the advance 22 August in Nature1.

The technique is based on the same principle as optogenetics, which was introduced about five years ago. In optogenetics, researchers engineer mouse neurons so that they express a light-sensitive protein, and then use flashes of light to trigger these neurons to fire. Researchers have used optogenetics to target subgroups of neurons and induce behaviors such as anxiety or compulsive grooming.

The new method uses light to control gene expression, rather than neuronal firing. To do this, the researchers engineered two molecules. One includes a light-sensitive plant protein, called CRY2, fused to a locator that targets the protein to a given gene of interest. The other is composed of a plant protein, CIB1, attached to an effector protein that turns gene expression on or off.

When exposed to light, CRY2 changes shape, allowing it to bind CIB1. This brings the CIB1 effector protein to the site of the gene of interest, where it modifies the gene’s expression.

Researchers used a virus to inject these constructs into mouse neurons. With a cable inserted into the animals’ brains as a light source, they were able to activate expression of GRM2, which codes for a receptor for the chemical messenger glutamate.

The method can also be tailored to change chemical modifications that alter gene expression. One set of these modifications alters histones, which act as spools for DNA and regulate how tightly the DNA is wound.

The researchers fused the enzymes that control histone modifications to CIB1, allowing them to work at chosen sites in the genome.