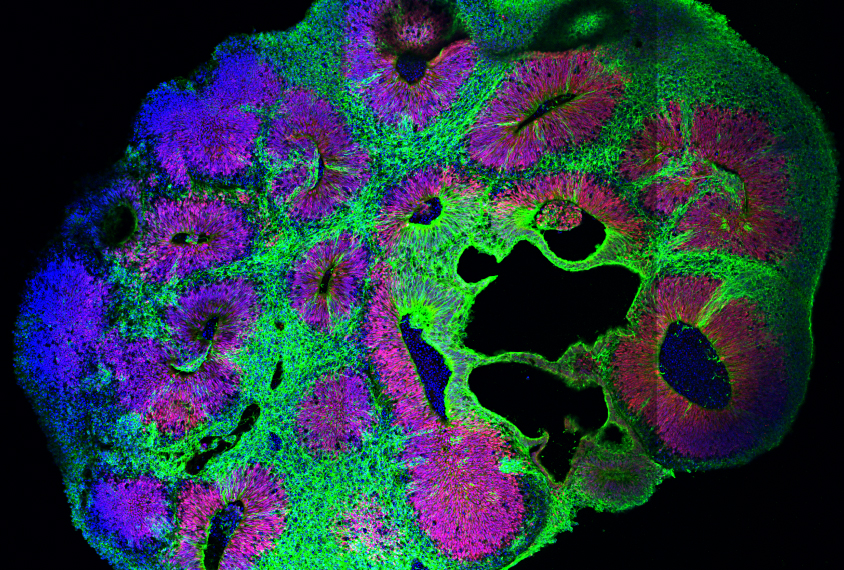 Gene screen: Tagging brain organoids and each of their cells (red, green) with unique DNA sequences enables researchers to explore genes’ functions across hundreds of organoids.

A new screening technique enables researchers to test the effects of gene mutations on brain growth by using organoids — spheres of cultured brain cells. It could shed light on the role of autism-linked genes in brain development.

To identify genes that control cell growth, scientists often introduce a variety of disruptive mutations and then measure how each one affects cell proliferation. One approach uses CRISPR technology to introduce different ‘guide RNA’ snippets into a pool of cells. The guide RNAs get integrated into the cells’ genomes and escort an enzyme, such as Cas9, to a specific spot to cut the DNA. After a period of time, researchers sequence DNA from the cells to determine the abundance of each guide RNA and infer which ones altered genes involved in cell proliferation.

These so-called ‘loss-of-function’ screens require all unmutated cells in the pool to grow at similar rates — which cells in 2D cultures generally do, but those in brain organoids do not.

“Some starting cells make 10 daughter cells, others make 10 million,” says Jürgen Knoblich, scientific director of the Institute of Molecular Biotechnology of the Austrian Academy of Sciences in Vienna, Austria. This makes it difficult to tell if differences in growth are caused by mutations or some inherent variability from cell to cell.

In the new method, researchers use DNA barcodes to tag individual organoids and each cell within each organoid. This barcoding enables them to track the effects of any guide RNA across hundreds of organoids, providing a clearer snapshot of its overall effects. 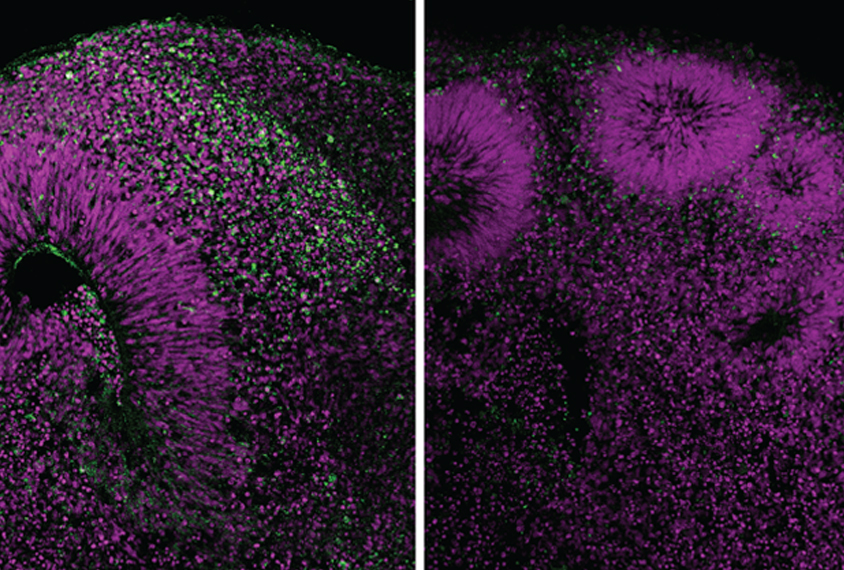 Protein pathway: Brain organoids (pink) lacking a functional copy of a gene linked to microcephaly (right) have lower levels of a structural protein (green) than do organoids with functional copies of the gene (left).

The technique, described in November in Science, is called CRISPR-LICHT. First, researchers engineer human stem cells to produce a version of the DNA-cleaving enzyme Cas9. They then use viruses to introduce an array of guide RNAs into the stem cells. The guide RNAs are designed to introduce damaging mutations into genes of interest. The viruses also ferry a unique DNA tag, or barcode, into each cell’s genome, enabling the researchers to keep tabs on which cells contain which guide RNAs.

The researchers then separate the stem cells and grow each one into an organoid. After 40 days, they extract DNA from individual cells within each organoid and add a second barcode that makes it possible to count how many cells each organoid has. They can then sequence the DNA — along with its barcodes — to determine the extent to which a gene mutation introduced by a guide RNA alters the number of cells in an organoid.

The team used CRISPR-LICHT to screen 172 genes — all linked to microcephaly, or small head size — for their ability to control organoid growth. Overall, mutations in 25 genes significantly decreased cell proliferation, suggesting they play a role in the condition, the researchers report. This finding nearly doubles the number of genes linked to microcephaly.

Many of the genes they identified play a role in biological processes already known to be involved with microcephaly, but some are involved in lesser-known pathways, such as regulating protein secretions from the endoplasmic reticulum, the cell’s protein factory. Brain organoids lacking a functional copy of a gene involved in this pathway are smaller in size and have reduced structural protein levels compared with organoids that have functional copies of the gene.

CRISPR-LICHT could be used to screen other gene functions, the researchers say, and could help scientists decipher how autism-linked genes affect brain organoids.