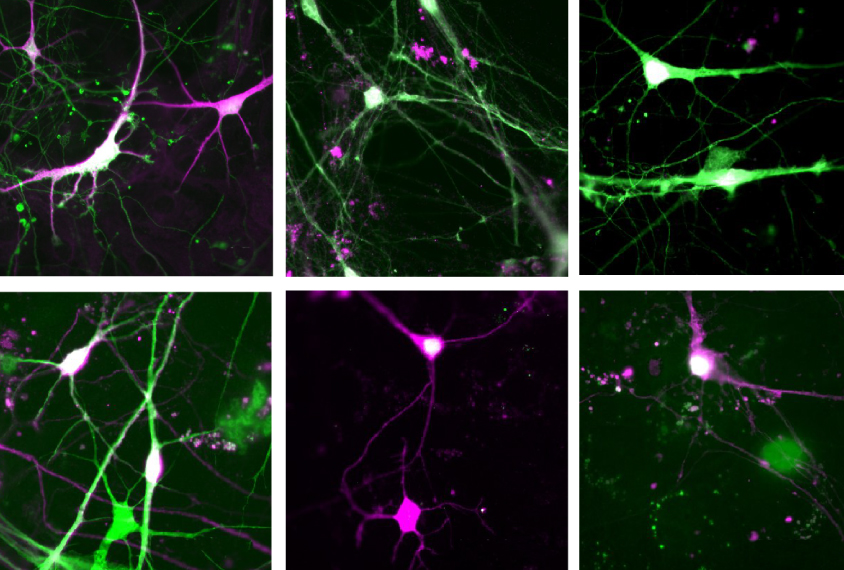 Consistent culture: Growing neurons on a lawn of cells enables researchers to analyze the effect of autism mutations.

Mutations in genes linked to autism, such as SHANK2 and SHANK3, may lead to abnormal synapses — the junctions between neurons — and disrupted neuronal signaling.

The method has problems, however: Not all the cells in a batch mature fully, so the number and density of neurons in a dish vary, as does the density of their connections2. This variability makes it difficult for scientists to spot differences between control neurons and those made from an autistic person.

In the new method, researchers controlled the density of neurons by growing a small number of new neurons atop a larger number of mature neurons of known density. They also cultured control neurons and neurons from an autistic person in the same dish, so that both developed under the same conditions.

The researchers grew neurons made from two autistic children with SHANK2 mutations and from four controls; three of the controls were the children’s parents.

They tagged the autistic children’s neurons and control neurons with fluorescent proteins of different colors. They then transferred several thousand of both types of neurons to a dish lined with a lawn of about 200,000 control neurons and star-shaped support cells called astrocytes. After nine weeks, the researchers assessed the shape of the colored cells, the cells’ electrical activity and the number of synapses they had formed with other neurons.

The autistic children’s neurons have more synapses, more complex shapes, longer extensions and more electrical activity than do the control neurons, the researchers found. This finding contrasts with earlier work in rodent neurons suggesting that SHANK2 mutations decrease the number of connections between cells.

Researchers could use the new culture method, called SparCon, to study the effects of other autism genes on the form and function of neurons. They described the method in April in Nature Neuroscience.