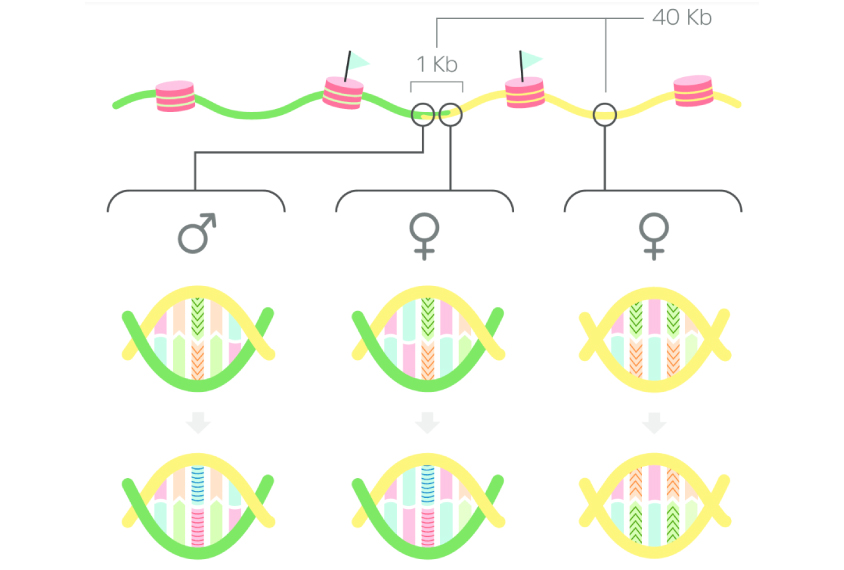 A pair of maps that depict variation in the human genome may help reveal the genetic roots of autism.

One map pinpoints ‘hot spots’ at which a process called recombination — which gives rise to genetic diversity — is most likely to occur1. The other details sites at which stretches of DNA are duplicated, deleted or inverted2.

In the process of making eggs or sperm, pieces of DNA shuffle, or ‘recombine,’ between pairs of maternal and paternal chromosomes. De novo mutations — those present only in the child — are often present near these hot spots. Hundreds of de novo mutations have been tied to autism.

Researchers typically map recombination sites using microarrays, which detect variations in single base pairs. But the approach has a low resolution: It can only map sites to within roughly 1,300 base pairs of their actual location.

To create a more precise map, researchers in Iceland used microarrays on the genomes of 155,250 people connected as parent-child pairs. They then sequenced the genomes of 28,075 of these individuals to pinpoint the recombination sites. They also located de novo mutations by comparing the genomes of children with those of their parents.

The resulting map includes 4,531,535 recombination sites and 200,435 de novo mutations. It has nearly the twice the resolution of similar maps.

About 70 percent of that reference genome is derived from a single individual. As a result, it only captures a miniscule fraction of human genetic diversity. The new map combines sequences from 15 individuals from four continents. Of the variants sequenced, 15,291 appeared in at least half of the participants. The results appeared in January in Cell.