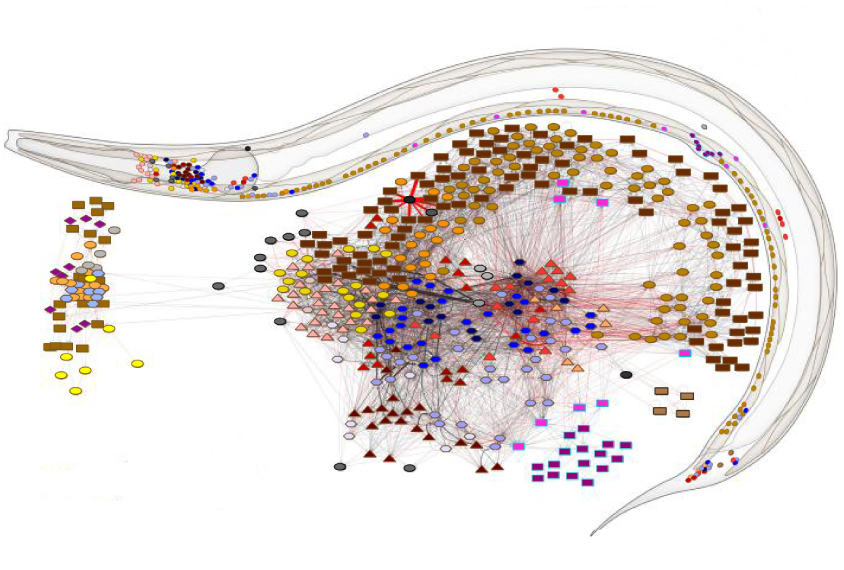 Wired to wiggle: Different types of connections (in black and red) link the 385 neurons in male roundworms.

Because these worms have a relatively simple nervous system, they are useful for studying conditions involving brain development, including autism. Scientists have, for instance, used CRISPR gene editing in C. elegans to investigate the effects of mutations in autism genes1.

The maps — one for each worm sex: male and hermaphrodite (which can self-fertilize) — show how the worms are wired, and include information about the strength of connections between neurons. They also reveal the direction in which nerve signals flow2. These ‘connectomes’ could help researchers understand the animals’ behaviors.

To construct the maps, the researchers painstakingly stitched together 54,000 digital images, some new and others previously taken using high-resolution electron microscopes. Where there were gaps in the images, they extrapolated possible connections between neurons from neighboring patterns. The data are available for download at Worm Wiring.

The resulting male and hermaphrodite maps include 385 and 302 neurons, respectively; the hermaphroditic worms have 8 unique neurons and the males have 91. Neurons in both maps have a median of 19 neighbors each, suggesting a high degree of interconnectedness. The findings were reported in July in Nature.

The team used the images to identify different classes of neurons and types of neuronal connections in the worms. They also measured the sizes of the junctions between neurons, or synapses, as a proxy for the strength of those connections. Between 10 and 30 percent of the differences in synaptic strength are attributable to sex differences, they say, confirming the importance of mapping out both sexes.

Their work is part of ongoing efforts to characterize whole-animal nervous systems. The researchers call these maps just a “conceptualization” of the systems, however, given the extrapolation involved and the fact that they drew on images from multiple animals.