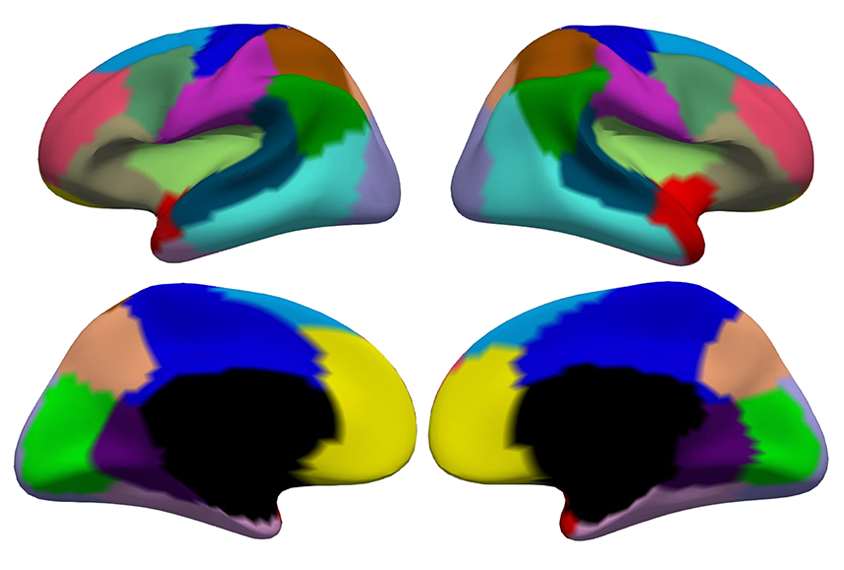 Part and parcel: A new approach identifies 18 brain regions by how their surface area expands with age.

A new machine-learning approach for mapping the developing brain highlights how different regions of the cortex grow and change in the womb and during infancy. The advanced method could help reveal brain development changes linked to autism and other conditions during this early period, the researchers who devised it write in their study.

Fetal and infant brain structure has historically been challenging to study using MRI, says study investigator Gang Li, associate professor of radiology at the University of North Carolina at Chapel Hill. Low-quality scans, small sample sizes and the use of processing tools designed for adult brain imaging have made it difficult to draw meaningful comparisons across participants and time, he says.

Li and his colleagues used a machine-learning method to analyze the cortical surface area in MRI scans from 735 babies, ranging in age from 29 postmenstrual weeks to 2 years old, from the Developing Human Connectome Project and the Baby Connectome Project. The algorithm divided, or ‘parcellated,’ the cortical surface into 18 regions per hemisphere based on how they expanded with age.

The findings “offer some fundamental insight into how specific regions of the cortex develop at different times,” says Tomoki Arichi, reader in perinatal imaging and consultant in pediatric neurodisability at King’s College London in the United Kingdom, who was not involved in the work.

The 18 regions differ from previous subdivisions of the infant cortex, the team found, but they remain largely symmetrical between hemispheres. That sort of symmetry is not necessarily surprising for brain development, but the finding is “nice to see,” says Tonya White, chief of the Section on Social and Cognitive Developmental Neuroscience at the U.S. National Institute of Mental Health, who was not involved in the study.

It would be interesting to use the same method to see whether these regional patterns of brain growth differ for children later diagnosed with autism, White says.

Some autistic children have increased brain growth during certain periods of development, previous research has shown, so this method might reveal where that overgrowth is taking place, White says. “Does it affect areas 1 through 18 all the same? Or is there regional specificity to that overgrowth?”

Moving forward, the researchers plan to incorporate brain scans from older children into the analysis, Li says. They also intend to use their method to evaluate how other components of brain structure develop throughout infancy, he says.