A new online map of the marmoset brain may enable researchers to better understand how neuronal connections function1.

At just 1 pound, the tiny marmoset is among the smallest of nonhuman primates. Because of its social nature and small stature, it has become a popular model for studying autism and other conditions. The marmoset brain is about 200 times smaller than a human’s, but it retains the same basic structure.

Most researchers have focused on the brain’s gray matter — the dense cellular bodies of neurons and their connections — in part because it is relatively easy to access, says lead researcher Afonso Silva, professor of neurobiology at the University of Pittsburgh in Pennsylvania. The fibers — or white matter — that connect brain regions are like highways along which neural signals travel, Silva says.

And yet white matter may hold the key to conditions such as autism that involve connections within the brain. If a particular white-matter pathway is atypical, Silva says, “it could be explaining why a patient has autism.”

Silva and his team mapped neuronal tracts using diffusion magnetic resonance imaging with high-powered magnetic fields, achieving a spatial resolution of 64 microns. Creating a map of the human brain at this resolution would be prohibitively time consuming because of its size, Silva says.

The researchers then combed through the data to separate and label individual pathways, referring to previous brain atlases — some hand-drawn — and relying on the input of expert neuroanatomists.

For example, the team identified the correct site of a pathway called the ventral hippocampal commissure, which had previously been wrongly mapped based on rodent brains. 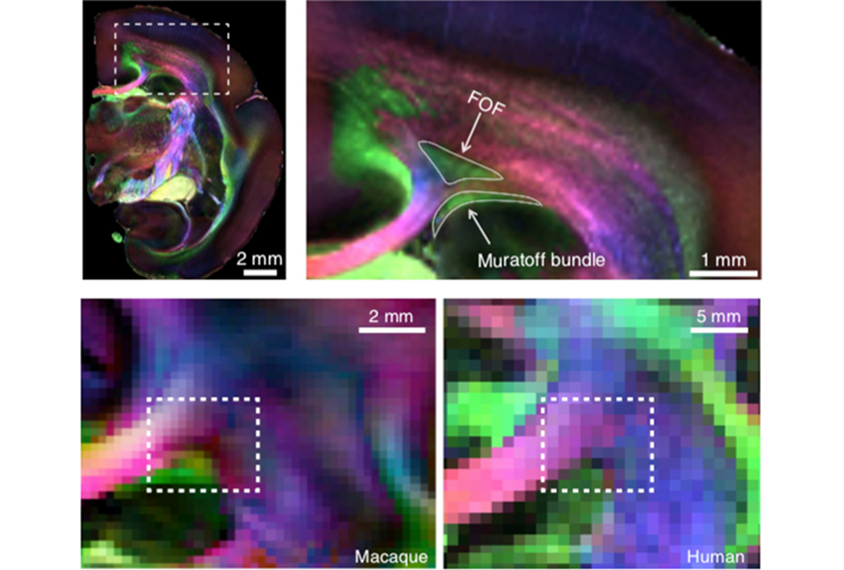 Highway lights: A new high-resolution map (top) distinguishes between pathways that are often mistaken for each other in other types of scans (bottom).

In another instance, the team achieved a high-enough resolution to differentiate between two pathways, the Muratoff bundle and the fronto-occipital fasciculus, that are often mistaken for each other.

“Being able to distinguish them is important because you don’t want to be in the wrong highway if you have a different destination,” Silva says.

The researchers say they also hope the map and the accompanying online database will help to validate the marmoset as an experimental model. The map is the second step in a three-part project to fully detail the marmoset connectome. The first part focused on gray matter, and the third aims to incorporate data from up to 200 marmosets to better understand variability in the brain.