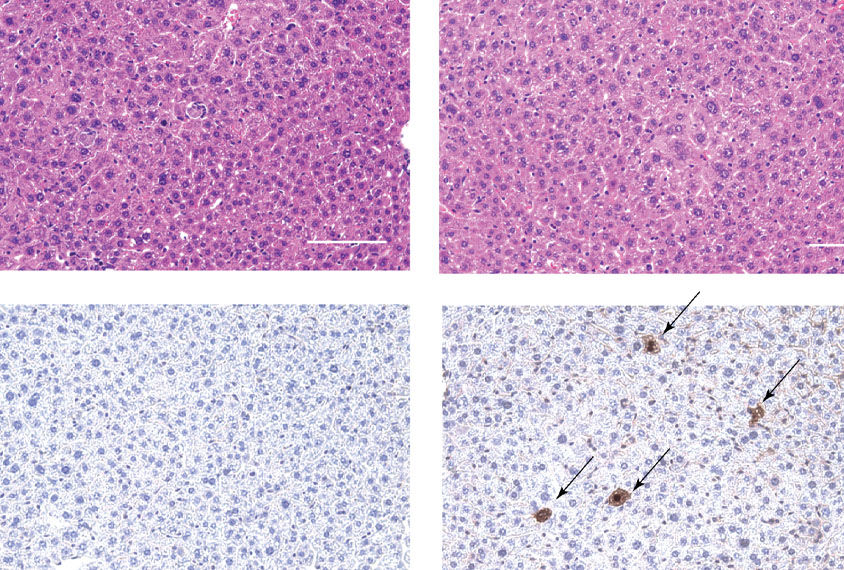 Restoring function: Unlike a conventional CRISPR system (left), a new method (right) can delete a stretch of DNA and replace a missing portion of a gene, restoring the gene’s expression in the liver of mice (arrows).

Two new methods make it possible to delete long sections of the genome, expanding the capabilities of the gene editor CRISPR. The techniques could lead to therapies that excise large insertions or duplications tied to autism, such as the DNA repeats that underlie fragile X syndrome.

To remove a segment of DNA, CRISPR systems typically use an enzyme called Cas9 to snip double-stranded DNA at two target sites. The cell’s own repair machinery can then join the cut ends, omitting the intervening sequence. But this process is error prone and can insert or delete unintended segments of DNA, called ‘indels,’ or rearrange large sections of the genome. Snipping double-stranded DNA can also cause cell death.

A different CRISPR-based system called ‘prime editing’ can make DNA repair more precise. In one version of the technique, a protein complex called a prime editor cuts only one strand of DNA at one of the two sites and the opposite strand at the other site. The prime editor adds a sequence to one of the cut strands to guide the repair.

Similar to conventional CRISPR systems, prime editing uses a strand of RNA to guide the editing machinery to a target sequence. But that RNA segment — called pegRNA — also provides a template for the DNA extension, which typically binds to a complementary sequence on the opposite strand. With longer deletions, the DNA extension may be too far from its target to guide repair, and so researchers have only been able to delete sequences less than 100 bases, or ‘letters,’ in length.

The two new techniques enable researchers to delete up to 10,000 DNA letters. Both were described in October in Nature Biotechnology.

In the first method, researchers used a pair of pegRNAs to guide editing machinery to cut target sites on opposite DNA strands and extend each strand with a specific sequence. They reasoned that a second DNA extension might help guide the first to its binding location in the genome. The team programmed the extensions to be complementary to DNA on either side of a sequence they wanted to delete. When the corresponding strands joined, the sequence in between them was erased.

To test the system, the researchers created pairs of pegRNAs designed to delete various sequences — ranging from 24 to 10,204 letters in length — and delivered them, along with a prime editor, to a batch of cultured human cells. For comparison, they also used a conventional Cas9 enzyme to make the same deletions in a separate batch of cells.

The new method, called PRIME-Del, worked as efficiently as the conventional CRISPR system and introduced substantially fewer errors, the researchers reported. When they deleted a sequence 10,204 letters long using PRIME-Del, only 3 percent of sequences near the edited site contained indels, compared with more than half of the sequences edited via Cas9.

The researchers were also able to insert segments of DNA at the junction of the deletion. In one test, they designed five pairs of pegRNAs programmed to delete a portion of a gene in a DNA loop called a plasmid. Each pair also encoded a sequence, 3 to 30 letters long, to be added into the plasmid at the edited site.

Simultaneously deleting and inserting sequences caused minimal errors and was as efficient as deleting DNA alone, the team reported. Using the approach, researchers could introduce molecular tags into the genome or avoid inadvertently changing the way a gene is translated into protein when DNA is erased.

PRIME-Del may also cause less damage to cells than conventional CRISPR systems because it does not cause double-stranded DNA breaks. Scientists could pair the approach with assays that introduce a variety of mutations into cells to investigate their effects, the researchers say. The team plans to explore how regulatory regions of the genome contribute to autism in this way.

Another team of researchers developed a different way to delete and insert DNA sequences. Their approach, called PEDAR, replaces one sequence in the genome with another.

As with the first approach, the researchers used a pair of pegRNAs to escort editing machinery to two sites flanking a DNA segment they wanted to delete. A modified prime editor cut both strands of DNA instead of one, however. The editor then added complementary single-stranded DNA encoding a new sequence to opposite strands, which guided the repair and replaced the flanked sequence.

The team engineered a pair of pegRNAs to delete a 991-letter portion of a gene and replace it with an 18-letter sequence. They then combined the pegRNAs with either the modified prime editor, a conventional prime editor or a Cas9 enzyme and assessed each system’s performance.

Only the modified prime editor deleted and inserted the targeted sequences, although the protein complex generated unintended edits at a rate comparable to Cas9. Further tests revealed that PEDAR can also edit longer sequences, inserting segments up to 60 letters in length and deleting roughly 10,000-letter sequences.

In another experiment, the team used PEDAR to edit a gene in a mouse model of tyrosinemia, a condition that is caused by mutations in a gene that codes for an enzyme and can lead to liver failure. In the mouse model, a sequence more than 1,000 letters in length replaces what should be a 19-letter segment of the gene and disrupts its function.

The new method could be used to develop gene therapies for a variety of conditions, the researchers say. They are working to optimize the system’s efficiency and accuracy.