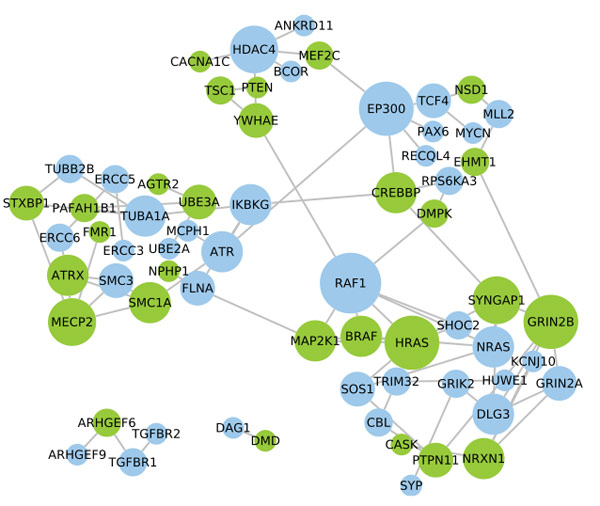 A new computational analysis can predict whether a gene is implicated in autism or intellectual disability with up to 98 percent accuracy, according to a study published 15 May in the American Journal of Medical Genetics1.

Genetic studies of autism have revealed a large number of potential autism candidate genes. Many of these are also linked to other neurodevelopmental disorders, such as schizophrenia and intellectual disability.

One way to identify the molecular pathways linking candidate genes is to perform a network analysis, which maps interactions between genes or their protein products. Researchers can use a variety of data with which to build these maps, including whether proteins bind to each other, whether genes are expressed at the same time and place in the brain, and whether they are involved in functionally related pathways.

In the new study, researchers created three computational classifiers using data for 114 candidate genes for autism and 223 for intellectual disability to determine the probability that a gene is linked to either of the disorders. Two of these classifiers are based on protein-protein interactions, and the third uses functional information, such as which pathways the gene is involved in, and what effect deleting the gene has on mice.

The functional classification is the most accurate, distinguishing autism and intellectual disability genes from a set of control brain-expressed genes with 80 to 98 percent accuracy, the study found.

The analysis also shows that intellectual disability and autism genes are more closely linked to each other than would be expected based on chance alone, suggesting that they belong to related pathways.