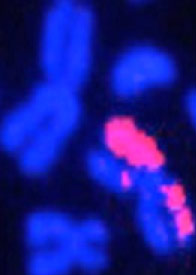 A new technique can help researchers spot inversions, or segments of DNA that have flipped their direction by 180 degrees, according to a study published in the April issue of Chromosome Research1.

Because DNA inversions are difficult to detect using traditional methods, the role they may play in human disease is mostly unknown, the researchers say.

Other types of chromosomal alterations have been shown to be important in many neurological disorders, including autism. For example, large duplications or deletions of DNA, called copy number variations, and translocations — sections of DNA swapped between chromosomes — are more common in children with autism than in controls.

Unlike these events, inversions do not change the size of the chromosome, and are difficult to detect. In one technique, researchers stain chromosomes with dyes so that they appear striped or banded under the microscope. Large inversions, on the order of several megabases, sometimes alter this pattern, but smaller ones never do.

The researchers synthesized 17,000 oligos, or short pieces of fluorescent DNA, that, over the length of the entire genome, bind to DNA oriented in one direction but not the other. As a result, most of these pieces would be expected to bind only one of the separated strands.

In the case of an inversion, however, the oligos would also bind the inverted sequence on the opposite strand, creating short blips of fluorescence on that strand.

The researchers tested the method by detecting inversions after exposing human cells to radiation. Without that exposure, they found a low rate (less than 0.3 percent) of spontaneous inversions during cell division. The technique can be used to explore whether inversions play a role in autism.