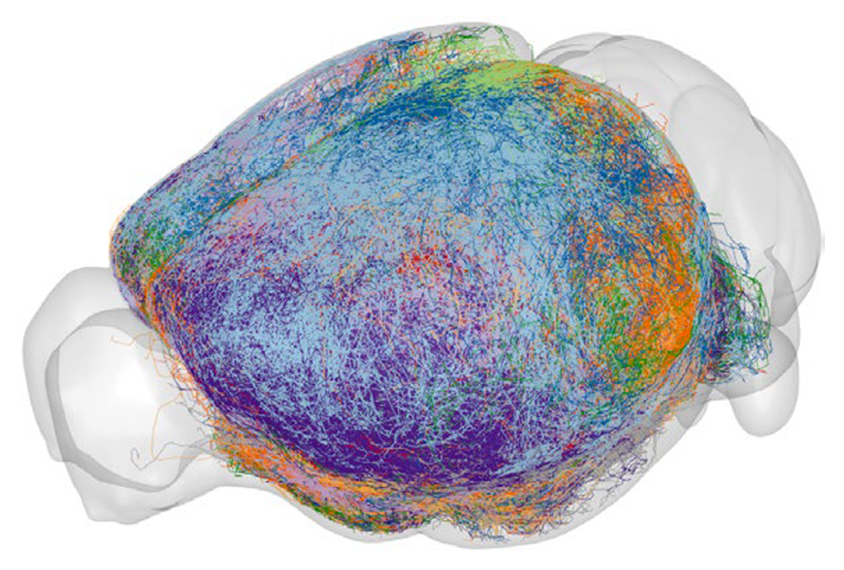 Wayfinding: The new atlas reconstructs the routes of 6,357 individual axons in the prefrontal cortex in mice.

A new brain wiring diagram traces the connections among thousands of single neurons in the mouse prefrontal cortex. This ‘projectome,’ the largest to date and freely available online, may help researchers investigate how altered connectivity within the region contributes to brain conditions such as autism, its creators say.

Cross-talk between the prefrontal cortex and a range of brain regions gives rise to complex behaviors, such as social interactions. To fully understand the neuronal basis of such behaviors, scientists have attempted to map neuronal connections in the mouse brain in 3D.

Some of these atlases chart long-range projections between clusters of cells, which has limited usefulness for understanding behavior because neighboring neurons can have opposing effects. Atlases that reconstruct pathways between individual cells, however, are limited in scope, showing only about 1,700 individual neurons across the whole brain. To make them, researchers have to manually trace axons — the long neuronal projections that send electrical signals to other cells — shown in microscopy images.

The new atlas makes use of software developed at the Chinese Academy of Sciences Center for Excellence in Brain Science and Intelligence Technology in Shanghai, China, to semi-automatically chart the shape and direction of the axons.

The software, called Fast Neurite Tracer — which is also available for download — used a series of whole-brain images to reconstruct the pathways of 6,357 individual axons snaking out of the prefrontal cortex.

The researchers used an imaging technique called fluorescence micro-optical sectioning tomography to capture whole-brain images from 161 mice. This method involves injecting the animals’ prefrontal cortex with a virus that encodes a fluorescent protein, causing neurons within the region to glow. The team then sliced the brains into micrometer-thick sections, photographed them and stacked the resulting images together to reproduce the whole brain.

Neurons in the prefrontal cortex fall into 64 subtypes based on axon morphology, the team found, which indicates that the cells are more diverse than previously recognized. Within a single subtype, some axons branched to multiple cortical regions; others formed long-range connections to other areas. For example, some neurons fanned out to the amygdala, a region involved in fear, and others connected to the ventral striatum, implicated in social behaviors.

These neuronal subtypes correspond with those identified in a 2021 study that analyzed gene-expression levels in individual cells from the prefrontal cortex, the team found, validating their approach. The findings were published in Nature Neuroscience in March.