Neurons made from teeth may aid autism research 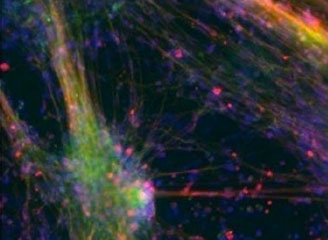 Cells extracted from baby teeth, which fall out on their own, may be better suited than skin cells for making induced neurons to use in autism research, suggests a study published 3 October in PLoS One1.

To study neurons associated with a disorder, researchers often revert skin cells from an individual with the disorder to a pluripotent state — from which they can become any cell type in the body. They then use these so-called induced pluripotent stem (iPS) cells to generate neurons in culture. A skin biopsy is painful and invasive, however.

Also, studies have shown that some epigenetic marks — modifications to DNA that influence which genes become active and when — may remain in these iPS cells. These may affect gene expression in the resulting neurons.

In the new study, researchers generated iPS cells from dental pulp, the living tissue inside of teeth, rather than from skin. Dental cells develop from the same set of early progenitors that neurons do, and so may be more similar to neurons than skin cells are.

Baby teeth are also easy to obtain, as children lose about 20 of them between the ages of 5 and 12 years. And for children with autism, even a visit to the doctor’s office to give blood (another source of iPS cells) may be difficult.

The researchers compared the genes expressed in neurons generated from dental pulp with those derived from two different skin samples. Overall, gene expression is similar among the cells, suggesting that they form essentially the same type of neurons. But the researchers found a subset of 63 genes that show statistically significant differences in expression.

The results suggest that tooth-derived neurons are well suited to study schizophrenia and related disorders such as autism, the researchers say.