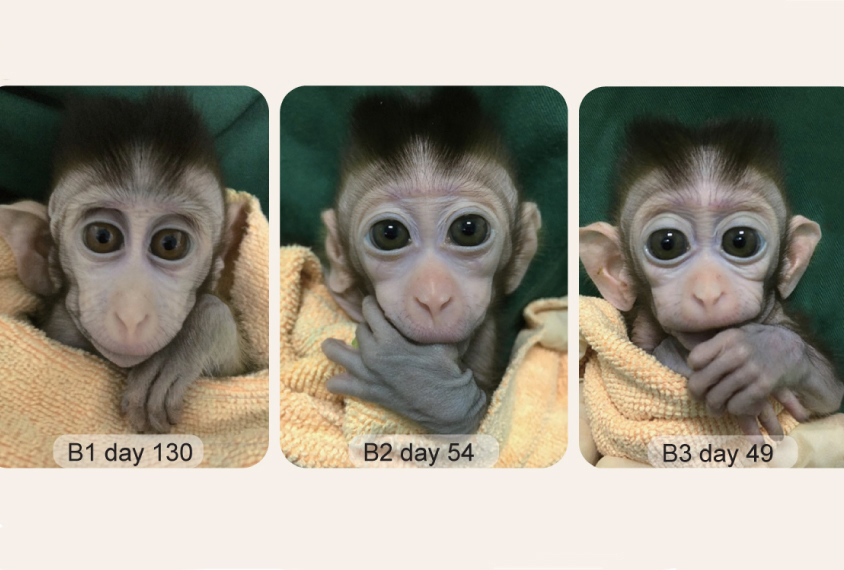 All alike: These monkey clones carry mutations in a gene that regulates sleep-wake cycles.

Scientists have created five monkey clones, all carrying the edited version of a specific gene1,2. The monkeys’ birth shows that it is possible to make genetically identical primates that can serve as models of specific conditions.

Genetically identical animals are useful for studying the genes underlying conditions such as autism: Scientists can alter a certain autism gene in one animal, for example, and compare it with another animal, making the effects of the mutation obvious. Monkeys are ideal models because their genetics and behavior is similar to those of people.

Scientists have generated monkey models for autism using the gene-editing tool CRISPR. But these monkeys are not genetically identical clones, and their diverse genetic backgrounds can muddle research results.

In two new studies, published 24 January in National Science Review, researchers took steps to eliminate that variation. They first used CRISPR to disable BMAL1, a gene that helps set the body’s circadian (day-night) clock, in 88 monkey embryos. They then transferred the embryos to surrogate monkeys, resulting in 10 pregnancies and eight baby monkeys.

The researchers selected one male to clone. Dubbed A6, the monkey showed no BMAL1 expression, and its hormones did not follow the usual circadian pattern. The monkey was also unusually active at night; it slept less and showed more fear and anxiety than typical monkeys do.

To clone A6, the researchers removed the nucleus from a donor egg and replaced it with the nucleus of a skin cell from A6, generating an embryo. They made 325 such embryos, which they implanted into 65 surrogate monkeys. Of those, 16 monkeys became pregnant and 5 gave birth to a live monkey.

The researchers verified that all five clones carry the disabling BMAL1 mutation. They plan to characterize the behavior of these monkeys when they reach adulthood.