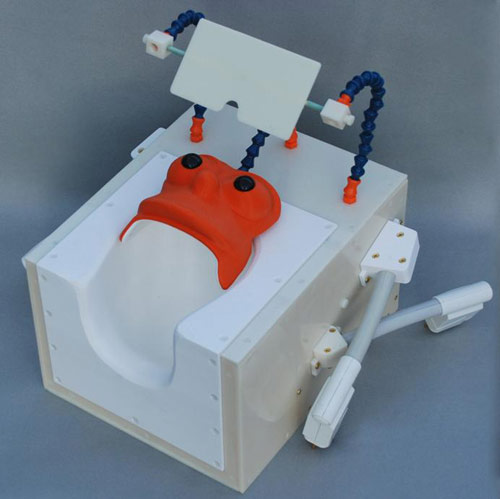 Researchers have developed functional magnetic imaging (fMRI) devices that are optimized to fit children’s heads, according to a study published in the December issue of Magnetic Resonance in Medicine1. These tools increase the quality of the data and deter head motion, which research suggests can lead to spurious results.

Several studies in the past few years have detected differences between the brains of children with autism and those of controls. But these can be confounded by artifacts, most notably head-motion in the scanner.

It is more difficult to image the brains of young children than those of adults, particularly children with autism, because they are more likely to be frightened by the process and to fidget during scans. To overcome this, some researchers sedate children while they are in the imaging apparatus, but this practice is not compatible with fMRI studies, which seek to measure brain activity while individuals watch videos or perform tasks.

In the new study, researchers constructed five MRI coils, the part of the device that detects the magnetic properties of the brain, that were optimized to fit newborns, 6-month-olds, and children aged 1, 4 and 7. These coils were designed to fit snugly around a child’s head in order to eliminate the gap that exists when researchers use standard, adult-sized MRI machines.

Well-fitting coils improve the quality of the signal and reduce noise compared with larger ones, the study found.

The new tool also offered another benefit: The tightly fitting coils — which gently grip the head and even the neck — also reduce the amount of head motion in the scanner. The average movement of a child in these devices is half a millimeter, compared with up to seven using the typical set up, reports a researcher involved in the study.

Researchers hope that the new device could prevent spurious data resulting from head motion, although this has yet to be directly tested.

The team is using a number of approaches to comfort and engage the children during the scans, such as showing them colorful videos instead of still images and decorating the top of the imaging helmet to look like Homer Simpson. They are also developing a quieter scanner, because the loud noises produced by the machines frighten some children.

The goal of all this work is to make it possible to scan children for up to 45 minutes at a time, which is 1.5 to 2 times longer than is normal without sedation, researchers say.

Future plans include using the new devices to look for early signs of the disorder by comparing brain scans of 4-month-old siblings of children who have autism with those of typical infants.