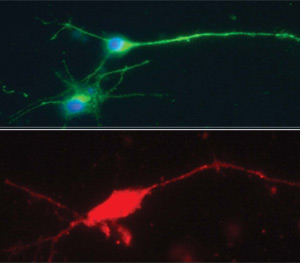 Researchers have made neurons from the skin cells of mice that model Rett syndrome, according to a study published in the December issue of Molecular Psychiatry1.

The experiment is the first to generate stem cells from a mouse model of the disorder and shows that neurons made from these stem cells have properties similar to those of neurons taken directly from mouse brains.

This provides confidence that neurons generated from the skin cells of individuals with Rett syndrome also match neurons in the brains of those people, the researchers say.

Rett syndrome, a developmental disorder, is most often caused by a mutation in one copy of MeCP2, which regulates the expression of other genes. Because MeCP2 is on the X chromosome, the mutation is usually lethal in boys and the disorder primarily affects girls.

Several teams have produced neurons from skin cells derived from individuals with the disorder, allowing researchers to see the effects of unique mutations in MeCP2 on neuronal function.

In the new study, researchers reprogrammed skin cells from female mice lacking one copy of MeCP2 to a pluripotent state, meaning the cells can become any type of cell in the body. The researchers then expressed four genes that induced these cells to develop into neurons.

In particular, the researchers successfully made glutamatergic neurons, which send activating signals in the brain. Neurons from the mutant mice are able to send signals, but they have defective action potentials — electrical spikes that function to transmit signals along neuronal projections.

In particular, neurons made from the mutant mice send fewer and weaker action potentials than controls do, the researchers found. This may be because of a problem with the ion channels that generate action potentials, the study found.

The cells show changes in electrical potential that indicate that they are able to receive signals from chemical messengers, and so can form active neuronal junctions, or synapses. But they have fewer electrical potentials than controls do, suggesting that they either make fewer synapses or ones that don’t work properly.