Mouse lines light up the brain’s off switch 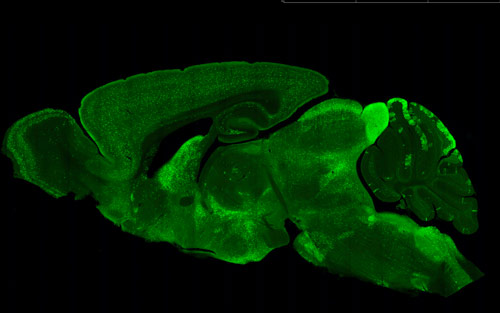 Lit location: New mouse lines allow researchers to restrict the expression of a fluorescent protein to an autism-associated family of neurons.

Lit location: New mouse lines allow researchers to restrict the expression of a fluorescent protein to an autism-associated family of neurons.

Researchers have engineered 20 mouse lines that allow them to manipulate genes in certain families of neurons. The resource, reported 22 September in Neuron, will allow scientists to better explore the function of key brain circuits in mouse models of autism1.

“[The technique] provides a powerful way to dissect what changes occur in which cells, and to track pathogenesis at a level that has not been possible before,” says lead researcher Josh Huang, professor at Cold Spring Harbor Laboratory in New York.

Each of the 20 new mouse lines targets a different set of inhibitory neurons, which dampen signals in the brain. Several studies have implicated interneurons that express the chemical messenger gamma-aminobutyric acid, or GABA, in autism. These findings underlie the hypothesis that autism could result from an imbalance between excitation and inhibition in the brain.

In the new study, researchers created a series of mouse lines that each express Cre, a protein that functions as a switch for gene expression. Researchers can use Cre to manipulate the expression of genes, adding fluorescent tags to proteins, deleting candidate genes, or even adding a protein that primes neurons to fire when exposed to light.

By targeting Cre to regions of the genome that are only expressed in certain classes of interneurons, the researchers can restrict these gene manipulations to specific circuits in the brain. For example, two mouse lines express Cre along with GAD1 or GAD2 — genes that synthesize GABA — allowing researchers to manipulate gene expression only in neurons that produce the chemical messenger.

Another of the mouse lines targets Cre to GABA neurons that express parvalbumin. Still another alters genes expressed at specific stages in development to track how subtypes of neurons migrate through regions of the brain as they mature.