Modified protein switches neurons off in response to light 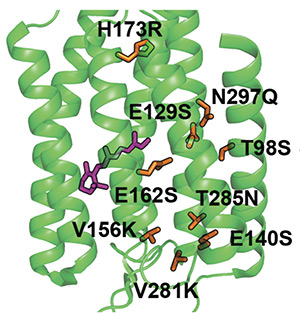 Key changes: Nine sections (orange) of a protein necessary for neurons to signal were modified to prevent the neuron from firing when exposed to blue light.

A much-celebrated technique called optogenetics causes neurons to fire in response to flashes of light. Researchers have now figured out how to use the method to switch neurons off, reports a study published 25 April in Science1.

Optogenetics uses light-sensitive channel proteins called opsins, which are derived from algae. When opsins are genetically added to the neurons of mice or fruit flies, those cells fire in response to light. The technique allows researchers to study whether activating specific groups of neurons can induce behaviors or conditions such as anxiety in the animals.

Typically, a neuron’s axon — the long, thin part of the cell that conducts electrical impulses — has a negative charge inside and a positive one outside. But when a neuron fires, proteins studding the cell membrane open and allow positively charged molecules to flow in. That flow creates a rapid change in the axon’s polarity, which ripples down the neuron and prompts the release of neurotransmitters, bearing a message to the neighboring cell.

When researchers arrange for opsins to be embedded in an axon’s membrane, they can prompt that polarity change with specific wavelengths of light. They need a similar way to inhibit neurons.

In the new paper, the researchers mutated an opsin so that it allows negatively charged chlorine ions, rather than positive ions, to pour into an axon under the influence of blue light.

They changed a handful of the ion channel’s protein building blocks to give the channel an overall positive charge and switched a negative residue near the channel’s gate for a neutral one. The negative ion flow that results blocks the neuron from firing.

The researchers successfully tested the mutated opsin in rat neurons. The tool gives them more precise control over neuronal activity as they seek to understand neural circuits and behaviors.