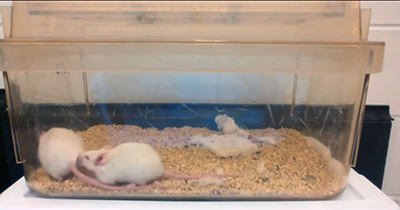 A tiny fiber-optic probe inserted into the reward center of the mouse brain monitors how the mouse feels about meeting a peer — or a golf ball. The unpublished technique was presented last week at the at the 2013 Society for Neuroscience annual meeting in San Diego.

Mice feel the most satisfaction when sniffing another mouse’s rear and when walking away from a golf ball, the study found.

The new technique is one of only a few ways to read the electrical activity of neurons in freely moving mice and is the most noninvasive, making it ideal for monitoring social interactions.

The method takes advantage of a fluorescent molecule that lights up only in the presence of calcium, which rushes into the cell when neurons fire. The researchers used mice engineered to express this molecule only in neurons that make dopamine — the chemical messenger that mediates a sense of reward — in the ventral tegmental area (VTA). The researchers placed the cable in the VTA, the source of most of the brain’s dopamine neurons.

The fiber-optic cable is 400 micrometers in diameter, and could probably be half that size, says Lisa Gunaydin, who developed the method as a graduate student in Karl Deisseroth’s lab at Stanford University in California. When neurons expressing the fluorescent molecule fire, the cable reads these as a series of spikes.

In the study, the researchers gave thirsty mice sweet water and, as expected, their dopamine activity in the VTA spiked each time they drank. When the mice interact with a new mouse, or a golf ball, the dopamine neurons fire more on the first encounter but dull with repeated visits, suggesting that the mice are most excited by novelty.

During the non-social interactions, dopamine neurons tend to fire most (92 percent of the time) as the mouse pulls away from the object at the end of the interaction. This suggests the mice don’t like the ball, says Gunaydin.

To try to isolate the neurons that respond to social contact, Gunaydin placed the cable into the nucleus accumbens. This region is implicated in social reward and social behavior. The setup allowed her to read from only those dopamine neurons that originate in the VTA and project into the nucleus accumbens. She detected significantly more activity when the mice interacted with other mice than with the novel object.

“This suggests that this projection is more relevant to social reward than the heterogeneous population of VTA neurons,” says Gunaydin. “We’re homing in on a social-specific circuit.” Other methods that detect neural activity in live mice cannot detect this level of specificity, she adds.

The fiber-optic cable used in this experiment is the same one that researchers use to relay light into the brain in optogenetics experiments, which use light to trigger neurons to fire. Researchers can easily combine the two methods, says Gunaydin.