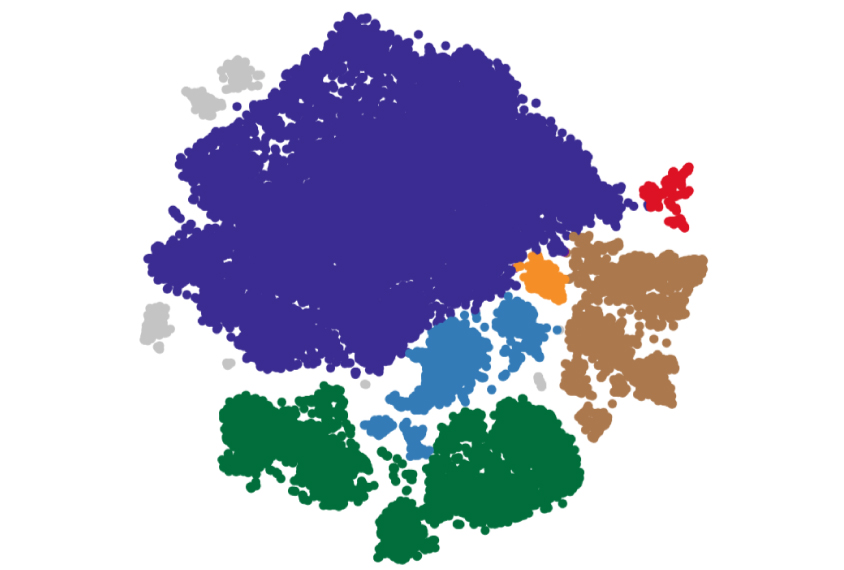 Colorful clusters: Patterns of gene expression distinguish among cell types in the brains of people with Rett syndrome.

A new technique reveals how mutations on the X chromosome, including those associated with Rett syndrome, alter the function of various types of brain cells1.

The findings could shed light on the biological pathways underlying Rett syndrome, a condition related to autism that is seen primarily in girls.

Rett syndrome stems from a mutation in the gene MECP2, located on the X chromosome. In girls, only one of the two X chromosomes in each cell is active; cells carrying the mutation lead to features of Rett syndrome.

Approaches that analyze gene expression in single cells can identify cell types, but they do not reliably reveal whether a cell expresses mutant MECP2. In the new study, the researchers found four single-letter mutations, also known as single nucleotide polymorphisms (SNPs), that identify the copy of the X chromosome that includes the mutant gene.

The researchers isolated single cells from the brains of mice with a MECP2 mutation. They encapsulated the nucleus of each cell in a water-based droplet and sequenced its messenger RNA. They identified cell types by their patterns of gene expression. And by searching for the telltale SNPs, they found 734 genes that are over- or under-expressed in mouse cells with an active MECP2 mutation.

The team also found 69 SNPs that identify the mutant X chromosome in postmortem brain tissue from two people with Rett syndrome and 79 SNPs in a third individual. They used these SNPs to spot changes in gene expression in the affected cells.

The researchers found that long genes are highly expressed in two types of neurons carrying active MECP2 mutations: excitatory neurons, which activate other neurons, and a type of interneuron that lifts suppression of neuronal activity. The longer the gene, the greater the boost in the expression in these two types of neurons.

The new approach could also reveal the molecular roots of other X-linked conditions, such as fragile X syndrome, the researchers reported in November in Nature Neuroscience.