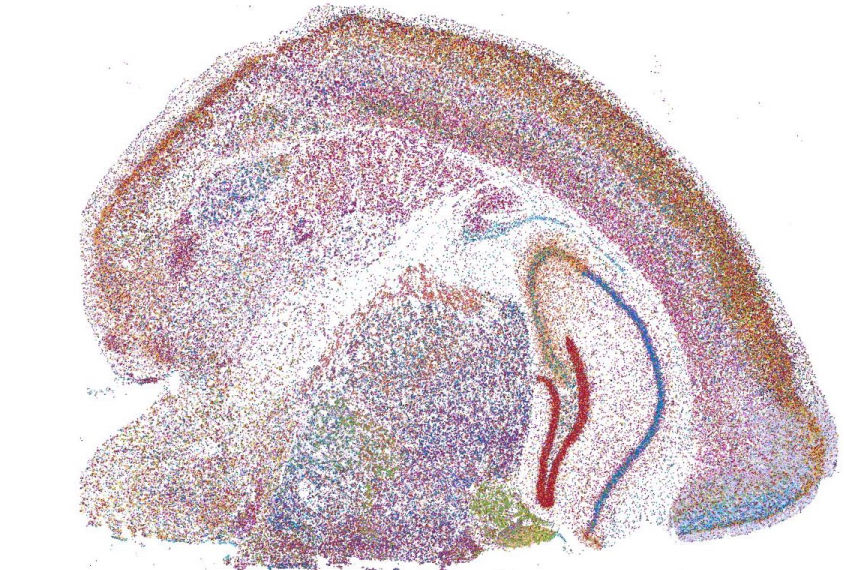 Mapping neurons: BARseq2 can trace neuronal paths and measure gene expression inside cells at the same time. In this mouse brain slice, each dot represents the position of a unique mRNA molecule, and each color represents a different gene.

A new method can map the paths of thousands of neurons in mice, while also quantifying the expression of dozens of genes in those cells.

The technique, called BARseq2 and described in Nature Neuroscience in May, could help researchers build a large-scale map of the neural circuits relevant to autism in mice, including at various developmental time points, according to study investigator Xiaoyin Chen, a postdoctoral fellow in Anthony Zador’s lab at Cold Spring Harbor Laboratory in New York. Chen will join the Allen Institute in Seattle, Washington, in August.

BARseq2 extends the team’s original BARseq method, which they reported in 2019. That version maps neuronal projections — or where the axon from each neuron traverses through the brain — and could measure the expression level of up to three genes in those cells.

For BARseq2, researchers must first create a set of short DNA strands with random sequences and convert them to RNA. They then package each RNA sequence into a Sindbis virus, an alphavirus first isolated in Egypt in 1952. Each altered virus infects a neuron in the animal and delivers its RNA cargo, thereby tagging each cell with a unique molecular barcode.

“The barcode, once it infects a neuron, starts replicating and makes millions of copies,” Chen says. “The barcodes get transported out to the axons, so you’re essentially filling up the whole neuron and all the axons and dendrites with that one particular barcode.”

The next day, researchers use chemicals to lock the RNA molecules into place in brain slices. Then they artificially duplicate the barcode in each neuron to form easier-to-spot clusters. Sequencing the RNA in the clusters reveals the barcode present in each neuron. To demonstrate the technique, Chen and his colleagues created tens of millions of RNA barcodes and injected them into individual mice.

Using a similar approach, researchers can measure the expression level of dozens of different genes in the neurons. They wash the brain slices from the mice with a short DNA sequence — called a primer — that binds to RNA copies of the gene of interest. They then convert the targeted RNAs into DNA and sequence them within the brain slices. Each RNA molecule forms a fluorescent spot; the number of spots reflects the gene’s expression level in the cell.

Researchers can reassemble the brain slices on the computer to generate a 3D map of the brain, in which the barcode sequences intertwine and show where neurons project.

Using BARseq2, Chen and his colleagues mapped the projections of more than 3,000 cells in the mouse motor cortex and auditory cortex, a brain region that may mature slowly in autistic children. They also measured the expression levels of cadherin genes — which help cells bind together and communicate — in nearly 30,000 cells.

Chen, who has been working on BARseq and BARseq2 for nearly seven years, says he and his colleagues developed the methods out of frustration. All of the neural circuits for simpler organisms, such the roundworm Caenorhabditis elegans, have already been painstakingly mapped, but only a small subset have been mapped for the mouse brain because it is more complicated.