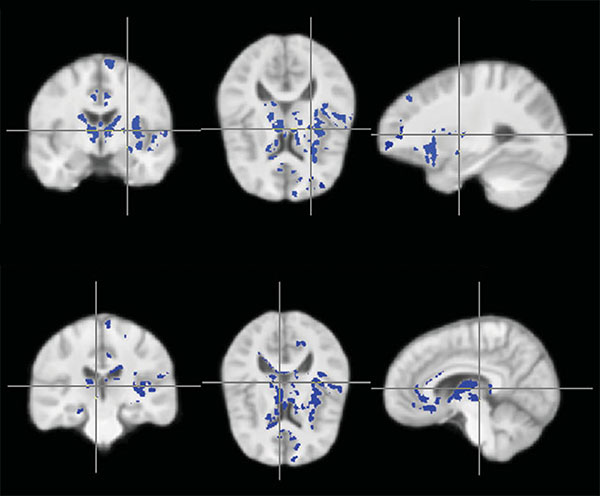 Altered insulation: Among people with autism, low myelin content in some brain regions (blue) is associated with more severe autism traits in general (top) and greater difficulties with social interaction in particular (bottom).

Electrical wires require insulation to efficiently conduct electricity. The same goes for neurons, whose projections are sheathed in an insulating material called myelin that allows them to fire rapidly.

There is less myelin in the brains of people with autism than in those of controls, according to a study published 11 August in Psychological Medicine1. Researchers applied a method that measures myelin in living brains with autism for the first time.

Magnetic resonance imaging (MRI) has previously shown abnormally structured white matter in people with autism. White matter is composed of axons, the long, myelin-coated projections that transmit electrical signals between neurons. However, it has been difficult to pinpoint exactly what is different — myelin, axon density or other components of the axons.

An MRI measurement that more definitively assesses myelin content, called myelin water fraction (MWF), has been around since the 1990s2 and is used in research on multiple sclerosis. In the new study, researchers for the first time applied a faster version of the method to look at autism brains.

The researchers looked at myelin content in the brains of 14 young men with autism with a mean age of 24 years and 14 controls with a mean age of 28 years, none of whom have intellectual disabilities. They found that those with autism have less myelin in some brain regions than do controls. In the autism group, those with the most severe social interaction difficulties have the lowest myelin levels.

The researchers speculate that low myelin explains the weak connectivity observed in the brains of people with autism. Without proper insulation, electrical signals travel slowly along the axons, making it difficult for regions of the brain to coordinate their activity.

The researchers next aim to figure out exactly when and why myelination goes awry in people with autism. They have tracked 160 children, half with autism, starting at age 6 years to see how myelin develops over the course of five years. They hope to extend their study to even younger children.