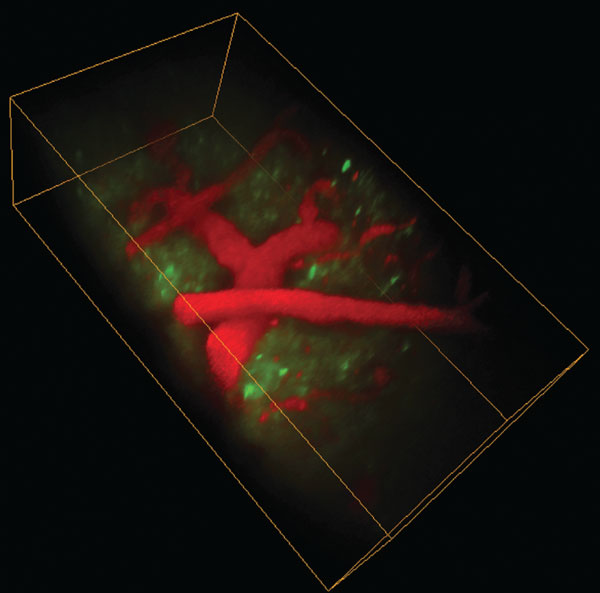 Neuronal action: The method reveals branches of neurons (green) that are receiving signals in the brain of an awake mouse.

The most common method to visualize brain circuits in mice marries standard two-photon microscopy with calcium sensors that light up when neurons fire. This lets researchers glimpse deep into brains, but only in one small region at a time. It can also take several seconds to capture a three-dimensional stack of images, making it difficult to visualize rapid processes, such as neuronal firing.By contrast, SCAPE microscopy can capture a similar three-dimensional image in a fraction of a second.

Another method, called light-sheet microscopy, can record a larger plane of activity in smaller specimens, such as zebrafish embryos. But researchers generally have to move the sample up and down to create three-dimensional images — a cumbersome process that requires the animals to be immobilized.

SCAPE microscopy is a version of light-sheet microscopy. But instead of requiring researchers to adjust the sample or microscope lens for three-dimensional imaging, it uses a mirror to sweep a sheet of light diagonally through the sample. This makes it 10 to 100 times faster than other microscopy methods.

Researchers tested the method in micewith windows implanted in their skulls to provide access to their brains.The researchers were able to glimpse electrical impulses traveling through neurons while the mice were awakewith their heads fixed in place.

They also used the method to visualize whole fruit fly larvae as the larvae wriggledon a glass slide.SCAPE’s speed allowed the researchers to capture the flies’ beating hearts and twitching muscles in crisp, color images. It should also be able to image zebrafish and worms, the researchers say, and will be useful for recording neuronal activity in live animals.

The main drawback of SCAPE microscopy is that it can record only from the outermost layer of the mouse brain. The researchers hope to combine the technique with two-photon imaging, which would make it possible to rapidly visualize deep into tissues in three dimensions. They hold a patent on the technology and plan to license and commercialize the microscope.