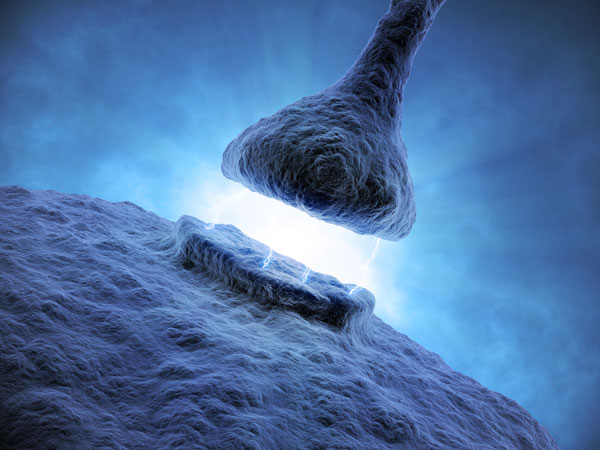 Mopic/Shutterstock.com Making connections: Mutations in proteins at neuronal junctions are associated with neural disorders, including autism.

Researchers have for the first time isolated and characterized protein complexes from human synapses — the junctions between neurons. The method, described28 November in Molecular Brain,may help reveal how defects in synaptic proteins contribute to autism1.

Some people with autism have mutations in genes that encode synaptic proteins, such as SHANK3 and neuroligin. Studying the effects of these mutations in human postmortem brains is a challenge, however. This is because the proteins form intricate complexes that are difficult to isolate, and that quickly degrade after death.

In the new study, researchers tweaked older techniques for isolating synaptic proteins from rodent brain tissue to be faster and require less tissue.They then used this method to isolate proteins from synapses in 28 frozen postmortem brains from the MRC Edinburgh Brain Bank. They focused on the signal-receiving end of the junctions, known as postsynaptic terminals, rather than the transmitting end.

The researchers found that the degradation pattern of one synaptic protein — a subunit of a receptor for the neurotransmitter NMDA — predicts the integrity of proteins in the synapse. Using this measure, they found that synapses in the cortex, the brain’s outer layer, tend to be better preserved than those in deeper brain structures. Overall, only 30 percent of the frozen brains in the MRC Edinburgh Brain Bank have synaptic proteins that are intact enough to study.

From these brains and fresh tissue collected during brain surgeries, the researchers isolated a specific set of protein complexes found in excitatory neurons and used mass spectrometry to identify their components. These so-called MAGUK-associated signaling complexes are involved in 76 disorders of the central nervous system, including autism. Autism-linked proteins found in the complexes include NRXN1, NRXN2, GRIN2B, HOMER1, PRKCB and SYNGAP1.

This is just one kind of synaptic complex that can be isolated from human brains, the researchers say. They hope eventually to compare these complexes between people with various disorders and controls.