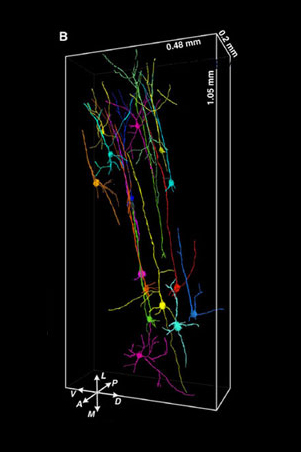 Nothing is handier than a good map: it provides the lay of the land, guiding travelers through an unknown world. You could say that the atlas of the mouse brain, published in the 5 November issue of Science, is a kind of map — only the landmarks are neurons, and the explorers are scientists.

Although researchers have imaged neurons and their individual connections, the technology available was not sophisticated enough to show how the pieces fit together in the whole brain. Chinese researchers have developed a new imaging system, called micro-optical sectioning tomography, or MOST, to generate a three-dimensional image of neurons in a whole mouse brain.

An ordinary light microscope cannot penetrate the thickness of an entire mouse brain, which is roughly one centimeter wide, so scientists cut thin sections — but this is of course only one slice of a larger picture. By contrast, MOST sections and images a mouse brain simultaneously, putting the pieces back together automatically to create a complete 3D rendition.

The researchers used MOST to look at the whole brain of a 5-week-old mouse over a whopping 242 hours, consolidating 15,380 sections.

This ability to see the higher-level connections between neurons could help scientists understand how different parts of the brain work together to form a highly complex unit. If autism is really a result of faulty connections, MOST could be particularly useful for studying the disorder.

Already, it has identified new facts, such as that Purkinje cells, a specific class of neurons in the cerebral cortex, stick to each other more closely than previously believed.

Of course, what that means is as yet unclear. As with all good maps, the value of a brain atlas will not be in the information written on the page, but in its ability to guide exploration.