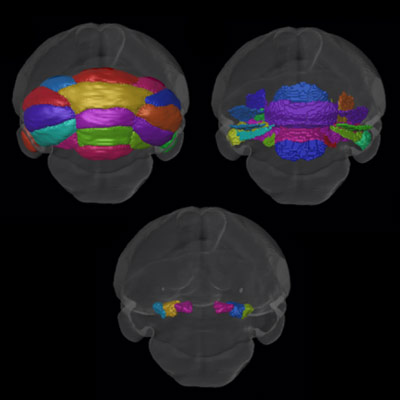 Paint by numbers: A detailed map of the mouse cerebellum has allowed researchers to define 60 distinct sites in this brain region.

By creating an atlas of 39 different areas in the mouse cerebellum, researchers have highlighted differences in this region in three mouse models of autism, they reported 22 October in Autism Research1.

The findings may help researchers make sense of the wide-ranging results from imaging studies of the autism brain.

The cerebellum integrates sensory information to refine motor control. People born with a malformed cerebellum have an elevated risk of autism. Postmortem studies have found that fewer neurons project from the cerebellum to the cortex in people with autism than in controls.

Several magnetic resonance imaging (MRI) studies have found abnormalities in the cerebellum of people with autism, but with no consensus over the location and magnitude of changes, or even whether the region is smaller or larger than expected2.

In the new study, researchers scanned the brains of 40 control mice, 20 of each gender. They labeled 60 sites within 39 larger structures in the cerebellum, representing both white matter — the bundled projections of neurons — and neuronal cell bodies, or gray matter.

The researchers then looked in detail at three mouse models of autism, each representing a different kind of risk factor: mice with a mutation in MeCP2, the Rett syndrome gene; those with an autism-linked mutation in NLGN3; and those lacking ITGB3, an autism-linked gene that regulates the serotonin pathway.

The researchers compared the mutant mice with their normal littermates and used the atlas to pinpoint the brain structures with differences.

Each mouse model shows some difference in the cerebellum, the study found. The MeCP2 mutant mice have the most significant changes, with 19 of their 39 cerebellar structures being bigger than in controls. Just 3 of the structures are bigger in mice with the NLGN3 mutation, and 28 are smaller in mice lacking ITGB3, compared with controls.

The findings suggest that researchers can use structural imaging in mouse models to home in on regions that mediate autism’s different symptoms.