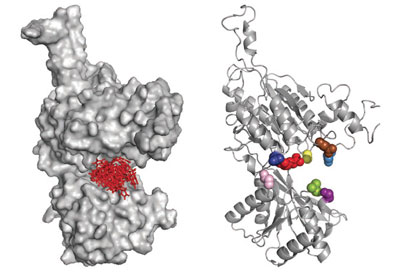 Light sensitive: Researchers have engineered a version of a receptor molecule (right) that simulates binding to its chemical messenger (left, red) when exposed to light.

Researchers can use light to activate certain proteins that relay signals at synapses — the junctions between neurons — and that are key targets for fragile X syndrome therapies, according to a study published in the April issue of Nature Neuroscience1.

Using this technique, they can home in on the functions of these proteins, called metabotropic glutamate receptors (mGluRs). When neurons release the chemical messenger glutamate, it binds to mGluRs on neighboring neurons, prompting those neurons to fire. mGluR signaling also strengthens connections between neurons in a process called synaptic plasticity, which underlies learning and memory.

The mGluR5 receptor activates many of the same genes that are dampened by the FMRP protein, which is missing in fragile X syndrome. A promising class of compounds in development to treat fragile X syndrome blocks the activity of mGluR5.

Most mGluRs are activated by a single set of molecules, but depending on the subtype of the receptor, the activation may lead to different changes within the cell. One way to parse the roles of these subtypes is to engineer changes only in certain mGluR subtypes and not others.

In the new study, researchers created versions of mGluRs that can be activated and deactivated by different wavelengths of light. This technique is based on optogenetics, which uses light to prompt neurons to fire.

To test whether altering mGluR activity can change behavior in real time, the researchers engineered zebrafish larvae to express light-sensitive mGluRs. They found that by alternately turning mGluRs on and off, they can raise and lower the larvae’s sensitivity to sound.

Typically, low sounds and vibrations spur zebrafish larvae to swim away, beating their tails. Louder sounds prompt the fish to bolt, curving their whole bodies into a C shape in the process.

Activating the mGluRs, either through drugs or light, lowers the threshold at which zebrafish make this C shape, the study found.

By engineering some mGluRs to activate in response to light and others to deactivate, scientists can pinpoint their differing roles in the brain, the researchers say.