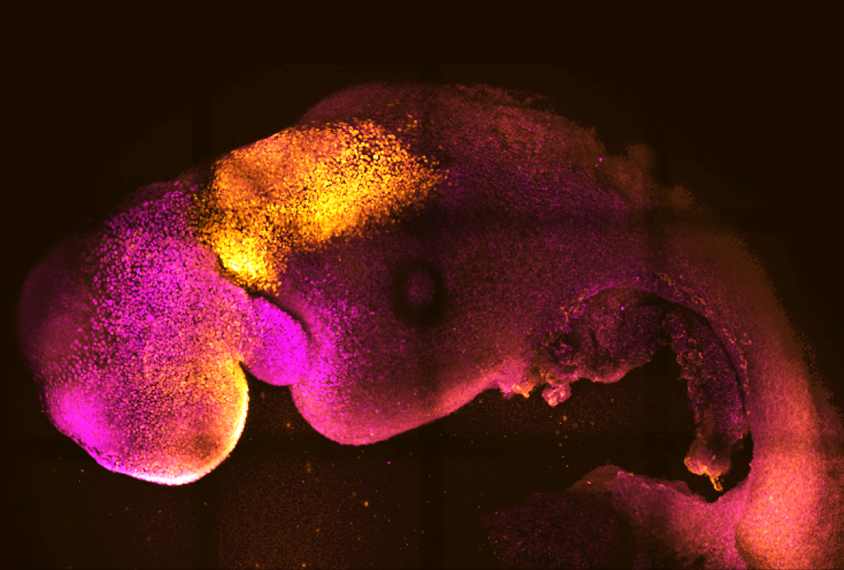 Dish development: Mouse stem cells grow into a synthetic mouse embryo that can survive for 8.5 days, or nearly mid-gestation.

A mix of three mouse stem-cell types can transform into a synthetic embryo — one that develops a budding brain, beating heart and other complex features — in a dish.

Such ‘embryoids’ could help to elucidate the relationship between genes and traits, including how mutations linked to autism affect early development. Two independent teams shared slightly different recipes to create these model systems in Nature in August and in Cell in September, respectively.

Studying mouse embryos made the old-fashioned way can be expensive and slow, with it sometimes taking a year to establish a new mouse line. By contrast, stem cell lines take only a couple of months to make and can give rise to embryoids in just several more days or weeks.

“Creation of embryoids using stem cells is driven by the desire to understand just how much developmental potential these cells have, find ways to replace the animals used in research, increase the speed of research, just to name a few things,” says Gianluca Amadei, a research fellow at the University of Padua in Italy and an investigator on the Nature paper, work he conducted as a postdoctoral fellow in Magdalena Zernicka-Goetz’s lab at the University of Cambridge in the United Kingdom.

“I hope that as we develop and refine these systems, it will be faster and faster to test the function of new genes and see whether they play a role in autism,” he says.

The embryoids represent a “great advancement” and offer a more holistic model than organoids to investigate autism, says Alysson Muotri, professor of pediatrics and cellular and molecular medicine at the University of California, San Diego, who was not involved in either study.

“It would be a dream for people like me who want to study all the tissues, all the mutations,” he says, envisioning introducing an autism-associated mutation in an embryoid and then studying how it manifests across the embryoid’s interconnected tissues.

To create the embryoid models, both research groups mixed together three primary ingredients: mouse embryonic stem cells plus two other cell lines that mimic cells involved in the formation of an embryo. The two teams used different techniques to generate one of those two cell lines, but their approaches were otherwise similar.

By day three, their mixtures had formed into an ‘egg cylinder’ structure, which the teams continued to culture. After five more days in a rotating chamber, the embryoids had grown to resemble a mouse embryo at mid-gestation. 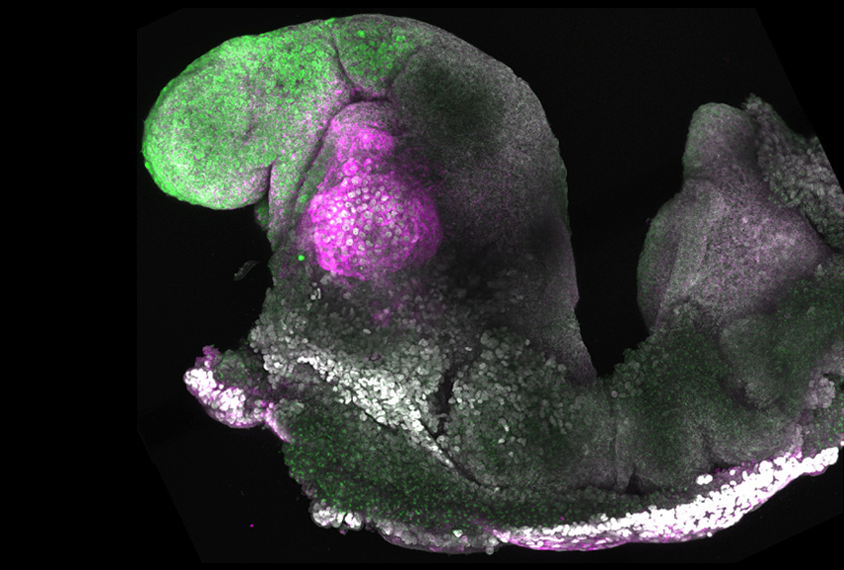 Up close: Early experimentation shows the synthetic embryo to be an accurate model of natural embryos.

At both an anatomical and cellular level, the ex vivo embryoids developed in step with how in vivo embryos do, containing structures resembling a beating heart and precursors to the forebrain, midbrain and spinal cord. The embryoids had no neural development at this stage but showed promise for studying gene-trait relationships. For example, deleting PAX6, a gene involved in brain and eye development, from the starter stem cells yielded embryoids with defects that closely mimicked those in embryos missing that gene, Amadei and his colleagues showed.

To improve this new tool, both research groups hope to nurture mouse embryoids to neurogenesis — but there is a large technical roadblock: Mouse embryoids, like mouse embryos, fail to survive more than several days ex vivo, without a placenta from which to draw nutrients. For both research teams, the embyroids stopped growing at day 8.5 — roughly mid-gestation in mice, just before organs begin to differentiate. Neurogenesis happens between days 13.5 and 16.5 in mice.

The larger aim is to one day adapt the technique for human embryonic or induced pluripotent stem cells, to study gene effects in synthetic human embryos.

“Human embryos cannot be utilized freely, for obvious ethical reasons. Hence, if we could develop similar systems for humans, it would enable us to understand how human development occurs in detail, which is something we cannot currently do,” Amadei says.

For now, applying these techniques to human stem cells remains out of reach. Because human gestation is about 14 times longer than mouse gestation, producing and nourishing a batch of human embryoids would take far more time and resources.

And perhaps the greatest challenge would be creating an ethical framework for human-embryoid experimentation, which is bound to be controversial. Currently, the International Society for Stem Cell Research encourages scrutinizing any experiments that culture human embryos for longer than 14 days after fertilization.

“This is such a gray zone,” Muotri says. “Nobody really knows.”