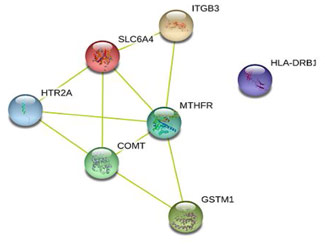 Similar effects: Drugs approved for different disorders may be linked if they have the same targets, structure or side effects.

Researchers have used protein and drug interaction networks to identify drugs approved for one disorder that may be useful for treating another, they reported 18 January in Bioinformation1.

Using this method, the researchers suggest that four drugs approved to treat high blood pressure — tolazoline, phenoxybenzamine, terazosin and phentolamine — may also be beneficial for autism.

Another study, published in Translational Psychiatry in December, suggests that a blood pressure drug, bumetanide, may improve social deficits in children with autism2.

Drugs go through rigorous safety testing as part of their approval. This makes repurposing approved drugs an attractive alternative to developing new candidates.

In the new study, the researchers first created gene-interaction networks using candidate genes linked to each disorder. They found seven genes, including MTHFR, that are potential candidates for both autism and high blood pressure.

The researchers then explored whether any of these genes is a direct target of an existing drug. To account for drugs with unknown targets, they developed a ‘drug similarity’ network that links drugs based on their structure, side effects and known targets.

A drug for one disorder that has several similarities to a drug for a different disorder is considered to be a candidate treatment for the second disorder.

The researchers used this approach to look for connections between autism, high blood pressure, Crohn’s disease and diabetes.