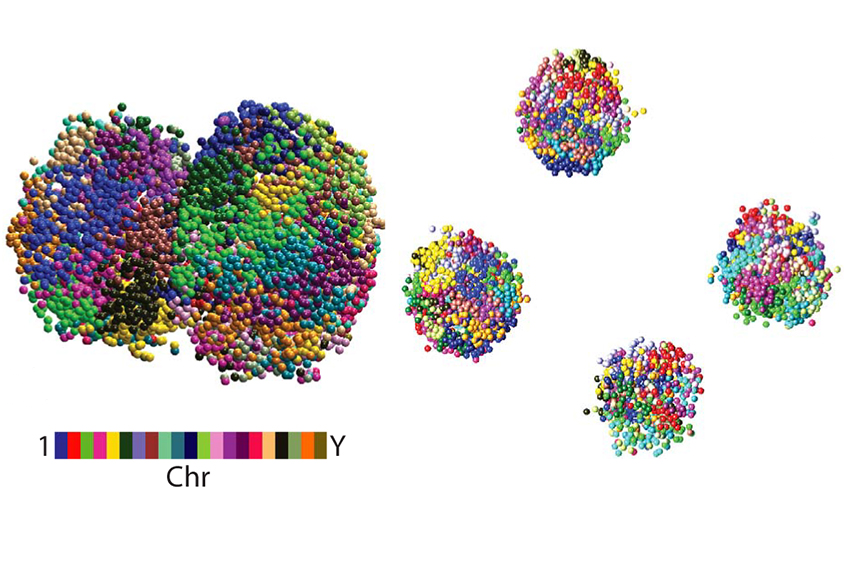 Going through changes: The method charted changes in the genome’s organization as a single-cell mouse zygote (left) transformed into a four-cell embryo (right).

A new technique enables researchers to sequence the DNA of an intact cell, providing a unique view of the genome’s organization inside the nucleus. It could help researchers better understand how genome structure is involved in conditions such as autism.

To sequence DNA, researchers typically have to first grind up cells and nuclei, which prevents them from seeing how that DNA was arranged. They can get a snapshot of the genome’s spatial layout by tagging specific sequences with fluorescent probes, or reconstruct it by sequencing DNA that is packed close together. But these approaches can only spot known sequences or offer an indirect look at the entire genome.

With the new technique, called ‘in situ genome sequencing,’ researchers can simultaneously sequence and image up to thousands of stretches of DNA within cells. “Now we can look at a microscope picture and say, ‘This sequence of DNA was here,’” says Fei Chen, assistant professor of stem cell and regenerative biology at Harvard University, who co-led the work.

The researchers first use an enzyme to split the genome into fragments while keeping them in their original positions. They then tag each fragment with a unique DNA barcode and make multiple copies of the tagged sequences.

Next, the team attaches to the barcodes a series of color-coded probes that each bind to a different DNA letter. They use a microscope to record the order in which colors are added, thereby revealing each barcode’s sequence and position within a cell. They then break up the cells and use conventional techniques to sequence the barcodes along with their attached genome fragments. By matching the barcodes from both rounds of sequencing, the researchers can map each genome fragment to its location in a cell.

The researchers tested the technique in human fibroblasts, or skin cells, and mouse embryos. They aligned DNA fragments, or ‘reads,’ to a reference genome, assigned them to chromosomes and mapped their arrangement within the nucleus. In human cells, they also charted the positions of repeating segments of DNA, which make up about half of the genome and are difficult to map using existing techniques.

The team was able to pinpoint and sequence hundreds of DNA fragments in individual skin cells and thousands in cells from mouse embryos, they reported in February in Science.

In mouse embryos, the team identified maternal and paternal chromosomes by spotting sites at which a single DNA base pair differed between parents. They then charted changes in the genome’s organization shortly after fertilization, as a single-cell zygote transformed into a four-cell embryo.

At the single-cell stage, paternal and maternal chromosomes segregate in distinct regions in the nucleus, the researchers reported. As embryos reach the two- and four-cell stages, however, chromosomes from both parents become increasingly intermixed, which jibes with findings from previous studies.

Analyzing the arrangement of chromosomes also revealed that their organization is similar among cells within the same two- and four-cell embryo. This consistency suggests that cells may pass down an epigenetic memory of their organization as they divide.

The method could help scientists study how DNA structure relates to gene regulation and cell state, the researchers say. They say the next step is to improve the technique’s resolution by pairing it with a method that expands tissue while keeping its organization intact.