Implant can target treatments to neurons 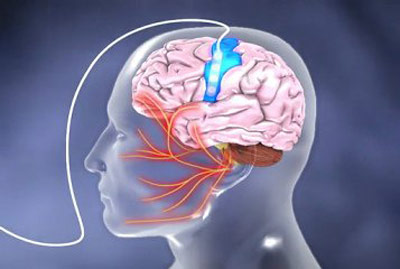 Direct source: Brain implants can monitor electrical activity in the brain and could one day deliver targeted drug treatments.

An ingenious new technique may allow small brain implants to release chemicals when and where they are needed, according to a study published 2 June in the Journal of Neural Engineering1.

The implant in this study was tested only in cultured rat neurons, but could someday treat epileptic seizures and other neurological symptoms caused by an imbalance between chemical messengers. About one-third of individuals with autism also have epileptic seizures, which contribute to intellectual disability and can result in death.

Individuals with autism also have known imbalances in certain brain chemicals such as gamma aminobutyric-acid, which regulates inhibitory neuronal signals.

Implants that monitor electrical activity in the brain, called multi-electrode array recordings, are already successfully used in medical applications, such as deep-brain stimulators that can treat Parkinson’s disease. The new study suggests a method to integrate these recordings with the targeted release of therapeutic drugs.

Some methods already exist for releasing drug treatments via implants, but these require either an external reservoir to hold the compound, or a bulky insert that carries the risk of brain damage and rejection by the host.

The new method involves coating charged electrodes with a protein polymer, combined with a drug of the opposite charge. When the electrode detects abnormal electrical activity, it stimulates a chemical change in the polymer that reduces the charge on the electrode and releases the drug.

Microelectrodes coated with 6-cyano-7-nitroquinoxaline-2,3-dione, or CNQX — a chemical that blocks excitatory signals — can reversibly inhibit the signaling of cultured rat neurons up to 250 micrometers away from the implant, the study found. The researchers next plan to test the implant in live rat brains.