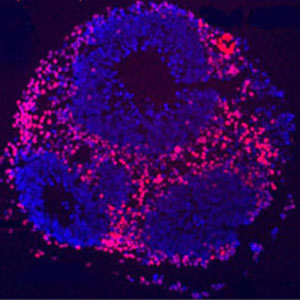 Painted pathways: Antibodies to marker proteins that are expressed by different types of neurons show the wide variety of cell types that make up the ’mini-brains.’

Researchers have induced stem cells to form three-dimensional clumps of neurons that resemble miniature brains, according to a study published 31 July in Proceedings of the National Academy of Sciences1.

The technique allows scientists to generate the full range of cell types seen in various brain regions, which is often not possible with traditional stem cell culture.

To study neurons in an individual with a disorder such as autism, researchers typically induce stem cells to generate a single layer of neurons. They then compare them with neurons from controls.

However, in single layers, neurons may not receive complex signals from adjacent cells. For example, they may not transform into a different cell type as they would in the brain.

In the new study, the researchers found that, when grown in suspension, stem cells clump together and grow in three dimensions.

The researchers exposed the stem cells to growth factors needed for the development of the human forebrain. The forebrain comprises most regions involved in higher-order cognition, including the cerebral cortex and the amygdala. The researchers processed the resulting aggregate of cells as if it were brain tissue, cutting it into slices for analysis.

The mini-brains have support cells (red/green)

The cells grow in a multiple layers, as in a brain

Some of the neurons (red/green) inhibit signals

The aggregate includes inhibitory and excitatory neurons, and support cells, such as glia, the researchers found. The cells assemble into distinct layers that are typical of an embryonic human brain.

The pattern of gene expression in the differentiated neurons is also typical of the cerebral cortex at around 8 to 10 weeks post-conception. They based these results on a comparison with gene expression in 1,340 postmortem brain samples from 15 different developmental stages and a variety of brain regions.

Researchers can use this approach to differentiate neurons from individuals with autism into aggregates that represent various areas of the brain. This would allow them to see whether autism is characterized by abnormal organization in those regions.