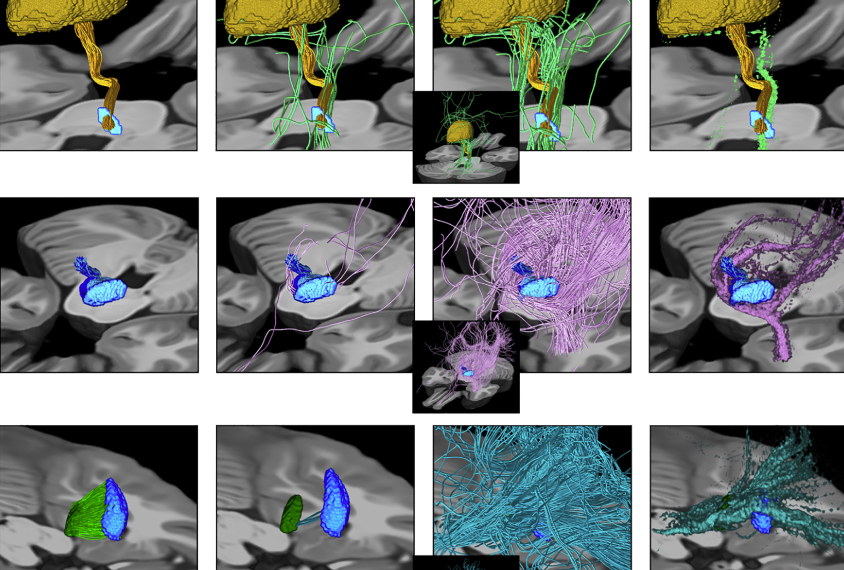 Lights, action: A new hologram shows how neurons talk to each other over long distances.

Bioengineers and neuroanatomists have collaborated to create a holographic representation of how information travels in the brain. The technology could be used to study conditions such as autism1.

Neurons transmit information through long projections called axons. But the paths these fibers travel have been unclear.

Tractography is effective for visualizing large pathways, such as those found in the corpus callosum, a bundle of nerve fibers implicated in autism. It is less adept at depicting smaller pathways such as those in the subthalamus, which often become tangled.

These limitations led the researchers to explore holographic renderings.

The hologram integrates data from 168 tractograms created by the Human Connectome Project with anatomical depictions of the thalamus and basal ganglia (another brain region). It provides color-coded depictions of the pathways, displayed vertically and horizontally. The researchers can choose to highlight one or many pathways at any time.

The hologram is large enough that multiple people in the same room can interact with it simultaneously. And the pathways depicted are more accurate than those based on tractography alone.

To validate the approach, researchers suggest testing it to see if it can replicate axonal pathways in the macaque, which are better understood than those in people. If the method passes this test, they say, it could be used in medical education and neurosurgery.