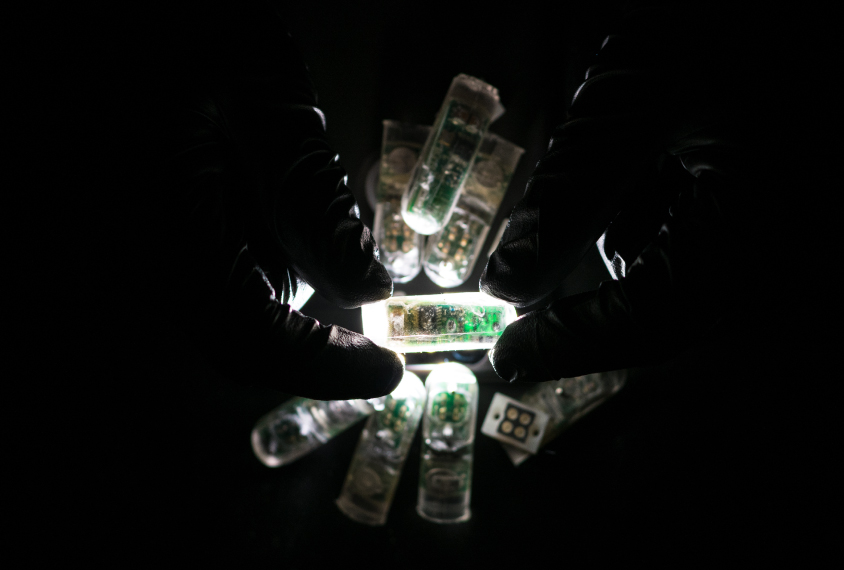 An ingestible electronic capsule enables researchers to instantaneously detect molecules in the gut1. The device could be used to find molecules associated with gastrointestinal problems, such as diarrhea and constipation, that often affect people with autism.

Doctors typically investigate gut problems by sending stool samples to a lab, or through a procedure called endoscopy, in which a thin flexible camera is inserted into the gut. But lab results can take days to yield results, and endoscopy can damage or irritate the gut.

The new tool comes in the form of a pill-shaped capsule, 3 centimeters long. It contains live bacterial cells engineered to emit light when they encounter certain molecules. An electronic detector inside the capsule captures this light, converts it into electronic data and sends the data wirelessly to a cell phone app.

To test the device, researchers engineered the bacteria to detect heme, a compound in blood. They fed pigs a solution containing a tiny amount of blood to model internal bleeding, through a tube leading down the throat and into the stomach. A few minutes later, they sent the capsule through the tube.

The device detected the blood within an hour. At the two-hour mark, it emitted about five times as much light as one given to pigs fed a solution without any blood. Researchers described the tool, called an ingestible micro-bio-electronic device (IMBED), in May in Science.

IMBED can be modified to detect other molecules. For example, the researchers tweaked it to identify thiosulfate and acyl-homoserine lactone, which can point to infection in the gut.

They plan to build smaller versions of the device so that it can be safely swallowed, and to engineer bacteria to detect a broader array of molecules.