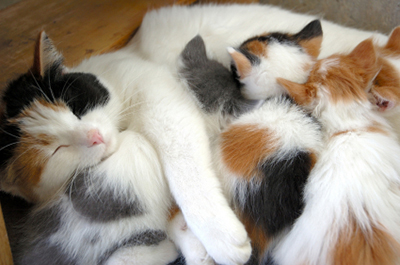 Mixed makeup: Mosaic expression of the genes that code for coat color leads to the characteristic patterns seen in calico cats.

A new software tool detects chromosomal alterations present in only a subset of cells in the body. This method, described 31 May in BMC Genomics, may help reveal mosaicism’s contribution to neurological disorders1.

Among the most well-known examples of mosaicism is X-chromosome inactivation in women: One of the two X chromosomes in each woman is randomly turned off in different sets of cells, so that some cells express genes from one chromosome and some from the other. Spontaneous mutations during cell division may also cause some cells to have genes that are different from those in the rest of the body.

Mosaicism is thought to underlie certain brain disorders, such as tuberous sclerosis, and may explain why in some cases only one individual in a pair of identical twins develops schizophrenia.

The new technique may allow researchers to identify instances of mosaicism in large databases of genomic information.

The researchers designed an algorithm called triPOD, for parent-of-origin-based detection in trios — the affected individual and his or her two parents. TriPOD looks at variations, or polymorphisms, in a single nucleotide. It compares these single nucleotide polymorphisms (SNPs) in the parents and then predicts the expected variants in their child.

The software program analyzes 600,000 SNPs for each trio of individuals. It then annotates the identified abnormalities on a reference genome.

Using this method, the researchers looked at mosaicism in 1,587 trios from the Autism Genetic Resource Exchange, a database of families that have more than one child with autism. They found 49 such events in this group. However, some of the mosaicism may have occurred when researchers cultured cells from the individuals, and may not be present in their bodies, the researchers note.