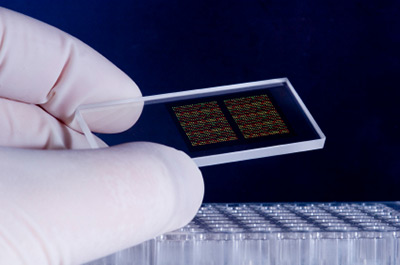 A new clinical test for chromosome alterations is customized to detect more than 380 known changes, including many that are linked to autism. The method, called KaryoArray, was published 24 June in the American Journal of Medical Genetics Part A1.

The approach used in KaryoArray, known as chromosomal microarray analysis, detects missing or duplicated regions of a chromosome, or copy number variations (CNVs). The technique matches areas of an individual’s entire genome to pieces of a reference genome on a microarray, or chip.

CNVs are more common in individuals with autism than in the general population. Chromosomal microarray analysis allows for a much finer resolution in detecting CNVs than does looking at chromosomes under the microscope. And it is more cost-effective and practical for the clinic than methods that use fluorescent probes that bind to chromosomes. Because of this, researchers recommend chromosomal microarray analysis as the first genetic test for diagnosing autism.

In designing a microarray chip, researchers need to balance covering as much of the genome as possible with the fact that many small CNVs may be benign.

The KaryoArray chip has a probe every 175 kilobases on average throughout the genome, which is in line with an official European recommendation2. This gives it both good sensitivity and specificity: KaryoArray missed only one previously reported CNV in 63 individuals and made only three false-positive diagnoses.

The chip also probes every 7 kilobases across regions containing known CNVs. For 11 of the 63 cases, KaryoArray identified among these regions a second, potentially relevant CNV that had previously been missed. For example, one individual with a deletion at 13q33.3 also has a 550-kilobase deletion within the 16p11.2 region, which is linked to autism.

The test did not identify any potentially harmful CNVs in 57 controls who had no CNVs detected using traditional testing methods.

The researchers then used KaryoArray to diagnose 540 individuals who were referred to their clinic for intellectual disability and autism. They found a CNV that likely contributed to the disorder in 105, or about 20 percent, of these individuals. A customized chip that has denser coverage in regions known to contain harmful CNVs may be more effective than standard chips, the researchers say.