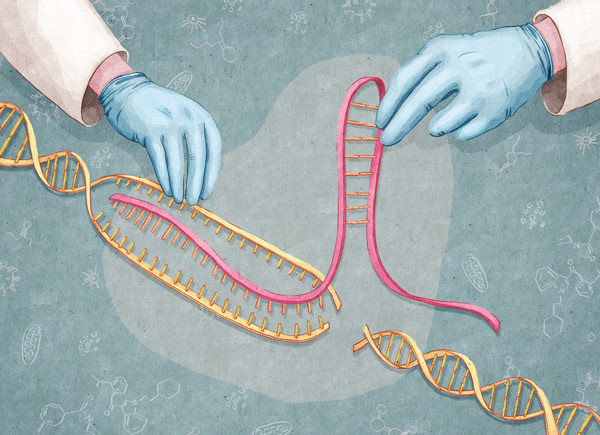 The genetic tool CRISPR, which cutsand pastes DNA, can eliminate specific proteins at the points of connection between neurons. The method, described 3 September in Neuron, could help researchers determine the role of those proteins in brain signaling1.

Neuronal junctions, or synapses, host hundreds of thousands of individual proteins involved in sending and receiving messages. Mounting evidence suggests that synapses play a role in autism. For example, the brains of children with autism do not prune unnecessary connections, as the brains of typically developing children do. Researchers have also linked defects in synaptic proteins to autism and other neurological disorders.

Because synapses are so complex, studying the function of specific proteins there has proved challenging. The new study suggests CRISPR can quickly quash an individual protein’s expression by snipping out select sections of DNA.

CRISPR works by slicing through both strands of DNA at a specified location. When cells try to rejoin the strands, they find the repair to be imperfect and shut down the gene’s expression.

In the study, the researchers used CRISPR to eliminate the synaptic proteins GluN1 and GluA2. These proteins help form receptors for the neurotransmitter glutamate, which triggers excitatory electrical signals in neurons.

DNA sequencing revealed that CRISPR successfully blocked the transcription of the genes in cultured neurons. Within 12 days, the researchers were unable to detect the proteins.

CRISPR appears to be an effective alternative to other gene-manipulating techniques, which have limitations. Genetically engineered mice can take several generations to show the desired mutation in the correct tissues, and using RNA to silence genes may not eliminate the protein. CRISPR avoids these pitfalls and may prove to be a useful tool for studying synapses, the researchers say.